Sorry About The Theft, Can I Have My Weed Back Now, Officer?

LaGrange Police arrested a pair of women on misdemeanor theft charges, but one of the women was later found to have some drugs and an odd interpretation of the law.

Wednesday afternoon about 12:22 p.m., officers with the LaGrange Police Department responded to the Walmart on New Franklin Road in reference to reports of Shoplifting in progress.

Police arrived and spoke with the store’s Loss Prevention Officer, who advised two females in the store had been concealing a large amount of items.

While police were on scene, the two females then walked past all the cash registers and out of the store through the Garden Center with a large quantity of merchandise. Store employees and police then confronted the females and escorted them to the Loss Prevention Office.

Once inside the LP Office, the store’s Loss Prevention Officer advised the females they had been caught on camera taking the items and told them to return the stolen property.

The females, later identified as Jasmine Carter and Shvonda Bassett, then unloaded a total of $451.07 worth of clothing, makeup, and miscellaneous items they had allegedly taken from the store.

Police then searched both subject’s purses to ensure they had no more stolen property and discovered Bassett was in possession of three small bags of suspected marijuana.

Bassett later claimed to have cancer and stated marijuana was self-prescribed because if she does not smoke marijuana, she is unable to eat. Police reminded Bassett that even though medical marijuana is allowed in some states, it’s still a crime to possess marijuana in the State of Georgia.

According to police Bassett even at one point asked if she could have the marijuana back, which officers obviously refused.

As a result, Carter, age 23, and Bassett, age 22, were arrested and transported to the Troup County Sheriff’s Office where both were booked into the jail and charged with Theft by Shoplifting – Less than $500. Bassett was additionally charged with Possession of Marijuana – Less than an Ounce.

Both subjects were later released from the Troup County Jail on bond. 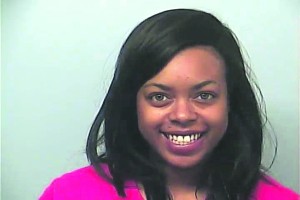