Using tips from vigilant citizens, LaGrange Police and Troup County Sheriff’s Deputies were able to work together to nab five suspects believed to have been involved in multiple Entering Auto thefts.

One of the witnesses was able to provide a partial tag number along with a description of the vehicle and occupants. Using this information, LaGrange Police and Troup County Sheriff’s Deputies were able to locate and stop a vehicle matching the description provided in the 1200 block of LaFayette Parkway.

During the subsequent investigation, authorities were able to recover five firearms and other property that are believed to have been stolen during entering autos from Troup and Meriwether County within the past 30 days.

Four of the guns located in the car were traced back to three recent entering auto cases that Investigators with the Troup County Sheriff’s Office were actively investigating.

Police were also able to confirm that the suspects had just entered at least two vehicles in the apartment complexes where the 911 callers had just reported the suspicious activity.

Five suspects were in the vehicle when it was apprehended, including two 16-year-old juveniles. Police have identified the adult suspects as LaQuincy Woodard, Bravian Elder, and D’Avanta Parks, all from Hogansville.

Woodard, age 18; Elder, age 20; and Parks, age 19; were arrested and transported to the Troup County Sheriff’s Office where they were booked into the jail charged with Felony Theft by Receiving.

The Troup County Sheriff’s Office would like to remind to everyone these incidents are usually crimes of opportunity and the best way to prevent them is to remove valuables from plain sight and to lock your vehicles.

This case is still under investigation by both the Troup County Sheriff’s Office and the LaGrange Police Department.

The author of this article can be reached via email at info@troupcountynews.net. 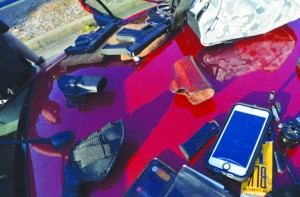 The stolen firearms and other items recovered from the suspect’s vehicle.