September 11 is a date that is circled on American calendars; it’s a day that will live in infamy. In 2001 this date sent shock waves through the United States of America due to the terrorist attacks made on this country. People of all ages during this time can somewhat remember the impact it had on them and their peers.

Brittney Lester said, “I was in 3rd grade at Long Cane Elementary School. The TVs for the morning school news were still pretty new. Announcements told teachers to stop lessons and turn the TV on. I was 7 or 8, but I still understood something bad was happening. I saw the smoke and fire, the upset news anchors. Mrs. Norris started crying and walked to the door to talk to her team teachers. They came to pick us up early and we sat down at MawMaw and PawPaw’s to watch the news while the adults worried and talked and tried to explain.

I remember more about what happened after. They had talks at school. We had to write about how we felt. Everyone was going to church, people we had never met showing up. There were prayer vigils on the news, moments of silence, songs, decals and bumper stickers, and a sense of unity, even at my young age, that everyone could feel. We were not divided by color, gender, orientation, or even age. We were AMERICANS and proud of it.

On that day, September 11, 2001, the world stopped turning. I was in a class of innocent children.”

Fire departments all over the world felt the pain of those events the most including the LaGrange and Troup County fire departments. They too, have a place to protect a home to make sure is safe for all its citizens to live in. Their lives are constantly on the line, they are the unsung heroes of this community.

The 9/11 challenge is an event that wants to commemorate those first responders who died and the ones who were able to successfully get the job done during the attacks on the Twin Towers. The walk is to give first responders and citizens a demonstration of how difficult it was for responders in 2001 to travel 110 flights of stairs facing dangers at every corner. The individuals who participated in the challenge will never be able to feel the fear of those from 2001 but they can share the feeling of hope and dignity.

This event serves as a reminder to the fire fighters in our area that this is a brotherhood and a team effort exerted by those in the community they protect and serve. There is a brotherly bond with fire fighters all across the nation which made the tragedy that occurred on 9/11 that much bigger of a pill to swallow. Fire chief of the LaGrange fire department John Brant, said,’’ It’s a common bond from station to station across the nation, we all know what it’s like to be a fire fighter.” “For a nation 9/11 was devastating and emotional but to know 343 fire fighters died that day really impacted us emotionally for a while.”

It was an honor to those who participated in the event to be able to show first responders they are here for them as well. When asked what the event meant to him; La-Grange Fire Fighter Austin Stars says,” it’s a privilege to come out and honor these men and women who lost their lives to such a tragedy, it’s good to put on the uniform and show a little bit of respect.”The challenge was a personal one for many due to past memories putting them back in the exact place they were when tragedy struck. Melanie Turner of the Troup County News was one who felt honored to share the experience with the local first responders. “I wanted to let the first responders know that we appreciate them and all they do every day to help keep our community safe,” says Turner. It was important to her to show her support, she knows the importance of having them in the community. Turner said,” they are the line that stands between us and danger; they give of themselves everyday so that we can live the lives that we live. The sacrifices that they along with their families make for others are amazing.”

The community would like to thank the first responders of LaGrange and Troup County. Marketing and communications manager Katie Van Schoor spoke on her appreciation level that she has for local first responders here in La-Grange. “Every one of these guys is leaders and heroes of our community, “says Van Schoor. It serves the community well to support the unsung heroes of the city and county.

The author of this article can be reached via email at info@troupcountynews.net. 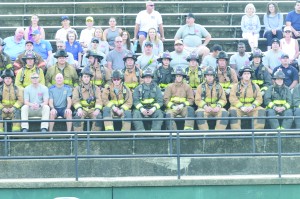