Breaking Strongholds from the Past, Remaking History, and Moving Forward

In the fall of 2016, the Troup Together group was co-founded by Bobbie Hart, Wesley Edwards, and Anton Flores. Troup Together is a group whose mission is for promoting forgiveness, healing, and racial reconciliation. Troup Together is working to help settle events of the past in order that the stories can be remembered, understood, and forgiven. In a recent interview, Hart reiterated; “We can’t rewrite history, but we can learn from it, and we can write a better story now”. She referred to the Theme of our recent National Day of Prayer and echoed the model, “Love One Another”.

Hart desires to help families who have been affected by injustices, incarceration, and poverty. “What’s next?” Hart stated; “Take us back to the cross to love and forgiveness; we must all walk in forgiveness”. Hart shared her deep appreciation for our Chief of Police, Lou Dekmar; Mayor Jim Thornton; and Sherriff, James Woodruff for their kindness, support, and leadership. Hart says she’s proud of our sheriff’s decision to put “In God we Trust” on all the service cars. “This is the kind of thing that will heal our nation”, she said.

A time of reflection and remembrance: It’s been two years since the Troup Together group and leaders of the community held a ground-breaking event at the Warren Temple United Methodist Church in La-Grange to honor the memory of Austin Callaway who died by lynching in 1940.

Chief Lou Dekmar, Major Keith Flory and Judge Jeanette Little spoke at the service. Apologies were stated on behalf of city and county leaders of 1940 who handled the Austin Callaway case. The apology event was followed by a prayer vigil and pilgrimage walk to the grave-site of Austin Callaway. The vigil and walk was led by members of the Troup Together group.

Chief Lou Dekmar commented about the event. “One of the individuals that were involved initially with the group that was working on the acknowledgment and apology was Bobbie Hart. Her background and knowledge, and the things that she shared with me, helped inspire me to do the acknowledgement and apology. I don’t think her contribution could be understated”.

A Call to Remembrance – Moving Forward On Saturday, September 7th, members of the Troup Together Group, along with Pastor Van Shrieves, attended a vigil at the location of Austin Callaway’s death at Liberty Hill. The group collected soil from the area where it is believed that Austin’s body laid for some time on the night of his death in 1940. A prayer of blessing and consecration was prayed over the soil.

“A Life Remembered” service was held at the Ark Refuge on Sunday Sept 8th. Bobbie Hart shared that the service was uplifting. Though 79 years have gone by since the death of Austin Callaway, he is still remembered. Bobbie Hart said; “He is remembered, not so much as to keep repeating his story, but rather to use it as a catalyst to promote justice”.

Deborah Tatum opened the service with prayer. She brought recognition to the late Pastor Louis Strickland who is documented as having written a letter in 1940 requesting an investigation of Austin’s death. A litany was read by Deborah Tatum’s mother, Frances Callaway Jones. A special song was performed by Brenda Hardnett.

Representatives from the City of LaGrange and Troup County Sheriff’s Department were present. A talk about “A Life Remembered” was given by Chief Dekmar.

Bobbie Hart has expressed sincere appreciation to our city and county leaders for their support in bringing about healing and reconciliation of injustices of the past. Even though our leaders of today had nothing to do with the forgone circumstances of wrongs; they desire to bring about healing. Hart stated that she was moved by the words of our leaders and mentioned a statement made by Judge Jeanette Little, “The more I see this the more I think about justice. If ever there is a time that I am not being Just; tap me on the shoulder, and let me know”. 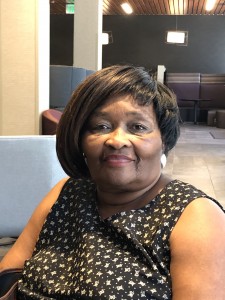