September 11th is a day that is etched in the minds of many, but most of the students participating in the 9-11 memorial ceremony that took place at Troup High were not born until after that day.

The flag ceremony, hosted by the Troup High School Air Force Junior ROTC, was held in remembrance of those who perished that fateful morning when airplanes flew into the Twin Towers at the World Trade Center in New York City and the Pentagon. An additional plane crashed in Pennsylvania. To honor the memories of those who lost their lives, uniformed cadets lined the front of the school building while surrounding the flag pole for the ceremony.

After the flags were presented to half-staff, the bell rang eighteen times – one time for each year of remembrance since the incident. After a moment of silence, Cadet Amaya Barker completed the morning by playing the familiar Taps that is typically played at dusk, during flag ceremonies, and at military funerals. 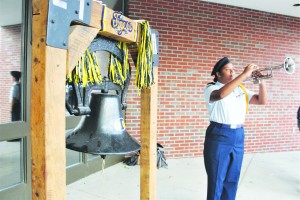 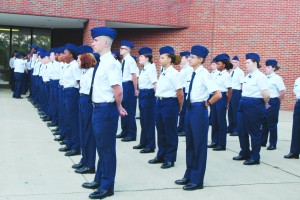