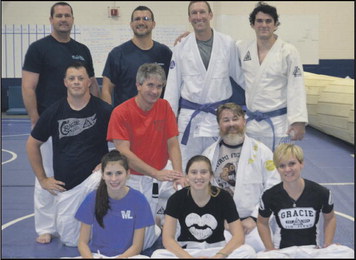 Officers Wade Sheppard and Craig Wheeler along with Sgt. Robert Moore and his wife Penny Moore, have a combined 60 years in law enforcement and have used the Gracie method of Jiu-Jitsu in the work field as a way to protect themselves and subdue an aggressive subject.

Robert began studying jiu-jitsu in 2011 when the LaGrange Police Department (LPD) sent him to a training class, Gracie survival tactics. The class is specific for active law enforcement and military professionals. He says “I was hooked! I began training with Wade and Craig within the department (LPD).”

Robert began demonstrating some of the techniques he learned on his fellow officers at LPD. “It was very well received because the officers could see how it applied to their every day duties.” At first the training was conducted for officers at the LaGrange Police Department training center, but as community curiosity was aroused they decided to move Officers Share Self Defense Knowledge With The Community

the class to a neutral location and open it to the public.

They use the Gracie Combatives curriculum. Gracie Jiu-Jitsu is a highly effective martial art and self-defense system with roots in Rio de Janeiro, Brazil. It was specifically designed to allow a person to defend themselves effectively against a much bigger and stronger attacker in a real life attack.

They are now offering free lessons to the community on Monday and Wednesday beginning at 6:30 pm and on Saturdays at 9 am. There are about 30 members at this time. Each session lasts around an hour. During the first part of the session standing techniques are taught and practiced. The second part consists of ground techniques such as Surprise Attack Counters and Survival and Escape Strategies.

Robert explained that the most important thing is awareness, be aware of your surroundings. Don’t look at your phone as you are on your way to your car instead put the phone away and look around. A lot of assaults could have been prevented just by thinking ahead of time. Park in well lit areas, call someone and let them know where you are and when you are about to leave.

Unlike Karate and other striking arts, Jiu-Jitsu does not rely on punching and kicking to survive or win the fight. Instead, it manages the distance to prevent the punch and eventually bring the fight to the ground. On the ground, by relying on leverage, technique and timing, a person can establish a superior position and apply submission holds such as joint locks and chokes.

Gracie Jiu-Jitsu is a fantastic way for a person to be armed even though they are unarmed. Jiu-Jitsu can be practiced by anyone regardless of age, gender or physical fitness.

This group is committed to provide a safe and family- friendly environment, with training instructors helping you along the way.

To finding out more about the training can go to www.gracieuniversity.com and look up Gracie Garages (search by state Georgia) and find a short video as well as how to contact them.