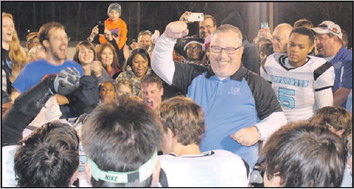 They no longer have to wonder if they’re good enough. They know.

In the championship game at Rams Field in Lithia Springs, Lafayette Christian played like it has never played before. The Cougars never let up for a minute in the Division II title game in the Georgia Independent Christian Athletic Association.

“We made a lot of plays. This was a team effort, and we turned the tide,” said Cougar sophomore linebacker Jacob Lueken, who had three quarterback sacks in the game.

Lueken was in a rush to make this state championship happen for Lafayette Christian. But the 5-foot-9, 170pound Lueken had a lot of help from his teammates. The Cougars harassed Central Christian dual threat quarterback Jared Farlow all night. Lueken was bringing some heat, along with Lafayette Christian junior defensive tackle Josh Shepherd, senior linebacker Eli Shepherd and senior defensive tackle Levi McCurry.

“We kept executing. We kept working hard. We kept their quarterback in the pocket. We played defense. This championship is just a dream,” said Josh Shepherd.

If that’s the case, Lafayette Christian doesn’t want to wake up.

“We shut them down. We pounded them over and over again.Webrokethemdown,” said Cougars senior tight end and place kicker Morgan Channell.

Farlow, the high profile player from Central Christian, went into the game averaging 112 yards rushing per contest. In this game, however, he was held to just 53 yards on 14 carries. He did run for two touchdowns, and Farlow still passed for 341 yards and two touchdowns. But the Crusaders did not win the game and the championship.

Lafayette Christian was just too much football team for the Crusaders on this night. The Cougars did run their winning streak to seven games.

“We were prepared and in control. We showed some perseverance. This (state) championship brings validity toourprogram(atLafayette Christian),” said Nate Shaw, the head coach of the 10-3 Cougars.

Lafayette Christian might not have won the state title at all if it wasn’t for an 85yard interception return for a touchdown from senior cornerback Jemi Reed late in the first quarter. Reed’s touchdown tied the game up at 6-6 with 1:05 left in the opening quarter.

Freshman quarterback Landon Whitley also made a huge difference in the game for the Cougars with an 18yard touchdown run in the second period. Sands scooted for a 10-yard touchdown for Lafayette Christian in the third period as well. Sands rushed for 51 yards on 12 carries in the championship game.

Jemi Reed also picked up 41 yards on eight carries for the Cougars. Eli Shepherd accounted for 30 yards on nine carries, along with a pair of touchdowns.

Central Christian was a beaten team by the end of the night.

“We got outmanned. Lafayette Christian doesn’t have a lot of holes (in its starting lineup),” said Crusaders Head Coach Paul Frantz.

Central Christian finished its season with a 12-1 record and the state runner-up trophy.