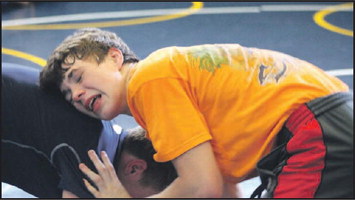 If he does nothing else, Coach Craig Garner wants to keep his Troup High wrestlers motivated and hungry.

That scenario seems to be working to a T. The Troup Tigers are stepping up with a 9-3 record. They did some more dominating at the Smiths Station & Opelika Duals on Tuesday, November 24 in Smiths, Ala.

The Tigers were bearing down, showing off and showing up. Hard work is their formula. The Tigers swallow that like medicine.

“Our guys are getting after it. We’re getting better every day. We have intensity and endurance. We still have a lot to work on,” said Garner. “We’re trying to develop these guys mentally and physically.”

Like all of the teams that they wrestle, the Tigers get just as fatigued, but when they get tired they ignore the pain. Troup High is playing some mind games on the wrestling mat. The Tigers are tough as pig iron from the top of the lineup to the bottom.

“We come out fighting and winning.We’re putting it together,” said the 6-foot Hunter Wood, who won three matches with pins for the Tigers in the 182-pound division.

Jeremiah McClendon had a 3-0 night with three more pins for Troup High School in the 145-pound class. Mc-Clendon is a junior.

They do have a boot camp quality. The Tigers are as prepared as a wrestling team can be. Garner pushes his guys to the absolute limit on the practice mat and in the dual matches. That is the Troup High way. The Tigers have won nine state championships in their long and illustrious wrestling history. And they don’t believe they have won their last one either.

“We have a tradition and legacy. We want to get back to that level,” said Garner.

But that takes hard work, luck and some more grueling Troup High practices. The Tigers never just go through the motions. They’d get extra laps just for that. The Tigers are finely tuned, and they want to win now. The Tigers have a chip on their shoulder.

They are building toward something. The Tigers do have a senior heavyweight, Hudson Newton, who is championship material. He had a 3-0 evening at the duals with two pins and a technical fall. Newton won his technical fall with a 19-4 score against a wrestler from Columbus Carver.

“Nine times out of 10 our team is in better shape (than our opponent). We’ve got some gas in the tank. We’re going to weather the storm,” said Newton.

And the Tigers are going to win with wrestlers like Darious Hanson, Trevor Upchurch and Brantley Robinson. Hanson won three matches in these latest duals in the 113-pound division. Upchurch took three more matches with two pins and a decision. Robinson was also 3-0 with a pin and two decisions in the 138-pound weight class.

Troup High sophomore Byron Butts won with techniques and leverage as well for the Tigers in the 170pound division.

The Troup High wrestlers bring the game day passion every match, without fail. And sometimes the Tigers even do it at night.