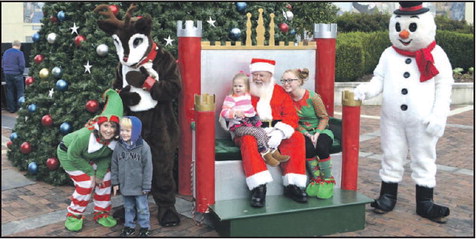 The annual holiday tradition has returned to LaGrange once again this year. On Thursday night, December the 3rd, the Christmas parade flooded the streets of downtown LaGrange and people flocked to see its wonders from all over the city.

The festivities kicked off with the annual Mingle with Cringle in front of the Chamber of Commerce building on Bull Street. Kids and parents alike came by to see Santa, his elves, Rudolf and Frosty the Snowman. Kids laughed and played, hoping up on Santa’s lap to whisper all of their Christmas hopes and dreams in his ear.

Around 4 o clock the day of, thousands gathered at the Granger parking lot, putting the finishing touches on all of their floats, ready to take the night by storm. The judging started promptly at 4:30 and shortly after that, the floats set out for downtown and the square. As the parade made its way through the downtown area and all around the heartbeat of the city, over half of the entire population of the city came out and lined the streets, waving and smiling at all the people on the floats. This was a great pull for the community as businesses, schools, and churches all pulled together and also gathered toys for children in need.

Many of the cities local stars and groups came out to celebrate the parade. One of the main stars last night was the famous Budweiser Clydesdales and the Budweiser Dalmatian, sent as an ambassador for LaGrange Grocery Company. Many of the city’s top officials and other important dignitaries were also in attendance.

This is the type of event that really pulls a community together. Children laugh and play, adults and old friends reunite, and new connections are made each and every holiday season. If you do not regularly attend the Christmas parade every year, perhaps trying it out next year with your friends and family can start a brand new holiday tradition.