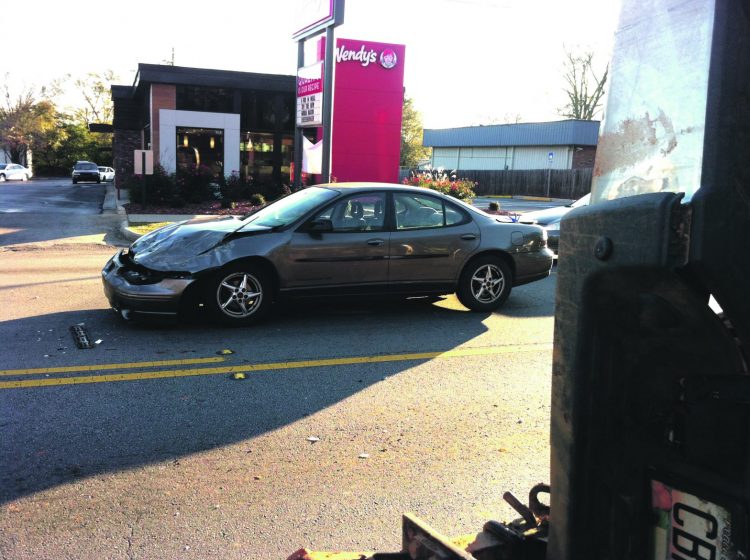 An overturned vehicle gave a man and woman quite a scare Monday afternoon, but no one was seriously injured in the Vernon Street accident, police say.

According to police, the adult male driver of a white Chevrolet pickup truck was knocked on its side after colliding with a silver Pontiac car around 4 p.m. Monday. The pickup truck was attempting to turn left out of the Wendy’s parking lot and head west on Vernon Street when the Pontiac collided with the truck as it traveled eastbound in the turn lane.

The driver advised he was being let out into traffic by a stopped driver and couldn’t see the oncoming vehicle as he attempted to enter the roadway. The two vehicles then collided and the truck hit the opposite side curb, which caused the vehicle to overturn.

Other than the stress of an accident, the driver of the truck seemed to be no worse for wear as he waited for his vehicle to be righted and towed.

Police say the female driver of the Pontiac and occupants had minor complaints, but did not immediately appear to be seriously injured.

Patrol officers routinely warn drivers to wary of crossing lanes when being allowed into traffic by another stopped motorist. Many accidents occur when people allow other drivers into heavy traffic and they attempt to blindly go around the stopped vehicle into a further lane.

The driver of the truck will likely be charged with Failure to Yield.

Both vehicles were sustained significant damage and were towed from the scene. Fortunately only the middle turn lane was blocked during clean up, so the afternoon drive home was minimally impacted.