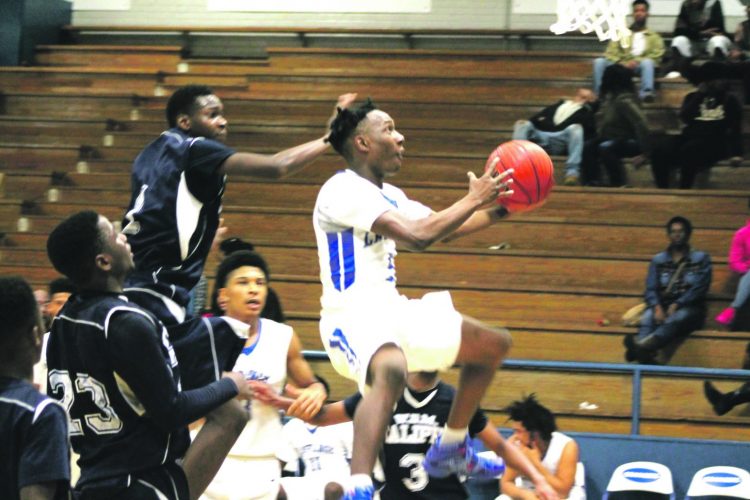 The home boys got the job done.

LaGrange High did anything and everything that it wanted to in a 73-46 blowout against Atlanta Mohammed in the first round of the Toyota Classic on Monday night in the Grangers gymnasium. LaGrange High never trailed, and the Grangers never blinked in the boys basketball game.

“When we play like that we’re a state championship (caliber) team. It was our night. Our game plan was to increase the tempo. We played great defense. We got some rebounds, and we shot well,” said LaGrange High senior guard Mike Hardy.

Old Mo was on the Grangers side. LaGrange High took the momentum with a three-pointer here, a putback there, and an o n slaught of dunks and layups. The Grangers had it all as they began the game on an 18-0 run. Atlanta Mohammed was in over its head.

“We pressured them. We ran, we got the momentum, and we had the fastbreak opportunities. We’ve got some good shooters,” said Head Coach Mark Veal of the Grangers (10-1).

After the first four minutes of the game, Atlanta Mohammed was done like a t-bone steak. The Caliphs were playing catch up from there on out. It was LaGrange High’s game. Granger junior guard Jerious Freeman knocked down a threepointer with 16 seconds left in the first quarter for a 23-5 LaGrange High lead.

That led to some more post-Christmas fireworks in the second quarter. During one stretch the Grangers made four consecutive threepointers with Hardy, Gabe Duckett, Freeman and senior guard Alex Dantzler. LaGrange High had a 35-10 lead to play with.

Junior forward Kenan Gray would follow with a dunk for the Grangers. Duckett and the 5-foot-5 Freeman would add two more three-pointers for La-Grange High. The Grangers went for the jugular. They also got back-to-back dunks from Duckett and the 6-foot-6 Gray in the last two minutes of the first half. And in the final 59 seconds of the second period the Grangers flushed the ball with two more dunks from Gray and sophomore Bo Russell.

LaGrange High took a 55-19 lead to the dressing room at halftime.

“They had the size advantage. We’re a small team, and we played a little slow. We tried putting a hand in their face,” said Stan Williams, the head coach of Atlanta Mohammed (2-7).

The Caliphs did outscore LaGrange High, 11-7 in the fourth period. The Grangers were uncatchable on this night in the Toyota Classic, however. And LaGrange High had scorers coming out of the woodwork with 16 points from Dantzler, nine points from Freeman, eight points from both Gray and Duckett, and six points each from Hardy, Russell, Rico Smith and senior guard Qua Epps.

It was one of those nights for the Grangers.They’ve had a lot of them this year with their 10 wins.