Callaway Buries The Lions, Cavs Improve To 5-0 In Region 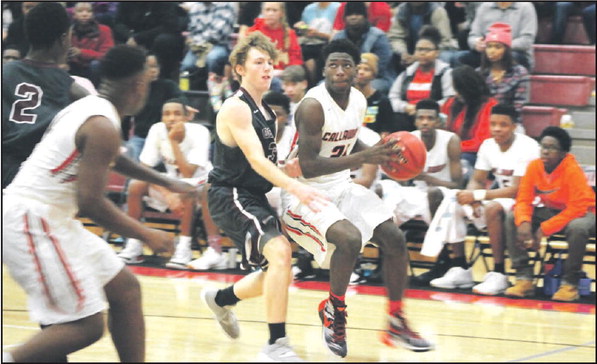 Central Carrollton was impressed. The Lions were also beaten.

The Darius Smileycoached team was riddled, rocked and taken to the cleaners in an 81-57 whipping at the hands of Callaway High on Tuesday night in a Region 5-AAA boys basketball tussle in Hogansville.

“We knew this was going to be tough. Callaway is the team to beat (in the region). They forced some turnovers, and we weren’t getting back on defense. Callaway has a bunch of good athletes,” said Smiley.

To start with there’s Callaway High senior center Joe Brown, who is a part of the big picture for the Cavaliers. Brown is 6-foot-4 inches of potential and tenacity. He’s a rebounder and a team player.

He has some offensive skills, too, as evidenced by his eight-foot jumper that gave the Cavaliers an 18-11 lead in the second period. Braylon Sanders, the Callaway High junior guard, has bought into the team concept as well. The 6-foot-3 Sanders shot through for a layup the next time down the floor.

The Cavaliers still had to weather a storm. Central Carrollton came back with a pair of three-pointers from Jarrod Jackson and Tay Slaughter. The Lions trailed by one point at 20-19 with 4:45 left in the first half. But Callaway High retaliated with a Brown layup for a three-point advantage. The Cavalier juggernaut continued with a Sanders dunk. Sanders had a few other things in mind, too, including a three-pointer and a second dunk during the next three minutes. Callaway High had a 35-25 lead before Central Carrollton had a chance to exhale.

In the third period the Cavaliers ran the Lions out of the gym with a 26-9 flurry, which gave Callaway High a 64-37 advantage. During that scoring spree, Cavalier senior forward Earnest Patillo went chin level with the rim for a dunk for an 18-point Callaway High lead.

Brown dished the ball to the 6-foot Patillo for the assist.

“We play as a team, and we run our offense. We play hard, and we run the floor,” said Brown, who collected 15 points.

Central Carrollton, which fell to 10-10 overall and 2-5 in the region, had some offensive issues despite getting nine points each from Slaughter, and senior forwards Emmanuel Bullock and Byron Brown. Jackson scored seven points for the Lions.