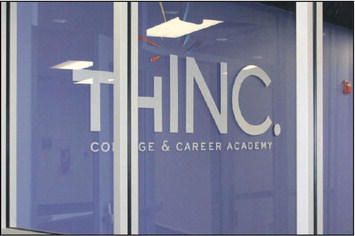 Tuesday evening during their second January Work Session, THINC College and Career Academy President Dr. Cathy Carlisle provided the West Point City Council with an update on the school after their first semester of operation.

Carlisle outlined a number of successes the school has seen and a few outstanding issues they need to work on for the future.

First and foremost, the school is achieving its goal to exceed the state and local average on academic standards as required by their charter.

The school stands by its students too, guaranteeing their training to local businesses, noted Carlisle.

“We tell employers if your student goes to our academy and after 90 days you aren’t pleased with them, we’ll retrain them for free,” explained Carlisle.

THINC currently has 474 students, 319 of which attend classes on campus, 52 are in work based learning, and 103 students dual enrolled in West Georgia Tech with their “Move On When Ready Program.”

Attendance is a major focus for THINC as it shows their students are picking up on “soft skills” that employers want. THINK is proud to have a 97.76 percent attendance rate, which exceeds the local high school attendance rate of 95.12 by nearly two percentage points.

Carlisle noted while attendance has been great, tardiness has been a major problem for the school. As it turns out, when high school students are allowed to leave campus and pick up lunch on the way to the academy, they often take their time and end up late. The school believes they have a handle on the situation now as tardiness has drastically fallen after students learned they would not be able to exempt final exams with more than a few tardies, even if their grades were otherwise good enough to do so.

The school is also proud of their male to female ratio. While many people think STEM based schools (Science, Technology, Engineering, and Math) tend to gravitate toward boys, THINC is shattering those preconceived notions with 253 females and 242 males enrolled.

Another challenge THINC is facing is they are quickly nearing capacity. Carlisle noted they currently have a capacity of 600 students, which they expect to hit within the next few years.

These agreements may not last forever, advised Carlisle.