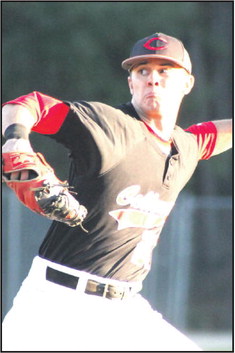 Cavaliers junior southpaw Dylan Johnson was in and out of trouble all night long.

He was walking the tight rope. He was bowing his back and gritting his teeth. Johnson was grinding and pitching. He was throwing strikes when he had to. He was battling, and he did that for seven innings against Columbus Shaw on Friday night in Hogansville.

It wasn’t always pretty. Johnson gave up seven hits, but he also struck out 12 batters in the Cavaliers 4-2 win over the Raiders in a non-region baseball game. Johnson never did back down.

“Dylan is a strong-minded kid. He had a good defense behind him, and he did not buckle. Dylan was locating his fastball and changeup,” said Callaway High senior catcher Hunter Rollins.

And when it looked like the game was headed south, Johnson just dug deeper. In the fourth inning Johnson fought back after giving up a single to Raiders sophomore Alex Marquand and an infield RBI single to Shaw’s Kaleb Podger. That knotted the game up at 2-2.

But Johnson rallied. He wasn’t knocked out of the game. The Cavaliers pitcher got Wesley Johnson of the Raiders to hit into a fielder’s choice for the first out. Dylan Johnson also avoided disaster later in the fourth inning. Johnson struck out Shaw sophomore Liam Carbone with the bases loaded for the second out.

Johnson also struck out Raiders junior third baseman Devin Perez to end the inning. Shaw left the bases loaded in the top of the fourth inning. Johnson would not give in. “Dylan had some good stuff. He was pitching on adrenaline. Dylan is a baseball player, and he’s been in a lot of big games,” said Head Coach Dusty Hubbard of the Cavaliers (3-1).

Johnson threw a total of 96 pitches in the game, and none of them were any bigger than those thrown in the top of the seventh. The Raiders had the tying runners on second and third with two outs. This would have been a perfect time to fold, but Johnson didn’t.

He struck out Marquand to end the game, and the Raiders left two more runners on base.

“The Callaway pitcher was getting better as the game went on. He hit another gear,” said Pat McGregor, the head coach of the 2-2 Raiders.

The biggest hit of the game came off the bat of Callaway High senior center fielder Devin Brock. He drove a two-RBI double to the left field fence in the bottom of the fourth inning. That gave the Cavaliers a 4-2 lead.

Callaway High also got an infield hit from Slone Raper in the fourth inning. But it was Brock’s extra base hit that provided the Cavaliers with the two biggest runs of the game.

“We’re on a hot streak. Our team has a lot of heart. We’re scrappy, and I was just waiting on a fastball,” said Brock.

He got all of that pitch, too, which was thrown by Shaw sophomore right-hander Andrew Tillery. He served up six hits and four runs in four innings. Tillery walked just two batters, but he took the loss.

“We did a good job of transitional hitting. Devin (Brock) put the barrel on the ball,” said Hubbard.