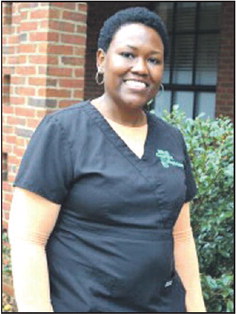 Tameka Johnson has been a West Georgia Health employee since November 2013. Having worked in customer service previously, she considers this her first “real job.’ Tameka is a Licensed Medical Assistant who is currently attending West Georgia Tech to become a LPN.

Jessica Bishop nominated Tameka and wrote: “I was excited but nervous when I started working here. Many people have helped me, but Tameka has been a beautiful example of kindness. With all her responsibilities she finds the time to answer all my questions. One day I had yet another question about how to do something in Allscripts. She was in class at the time but still took the time to answer. She knows the patients by name, and they absolutely love her because she always demonstrates strength and kindness. She is someone to be admired.”

When Tameka started at the West Point office she was nervous, but the staff was a little nervous too: Would she be able to handle being the only nurse at the clinic? They now know hiring Tameka was one of the best decisions they could have made. Support was always a phone call away, but Tameka was a quick study and works very efficiently. In her two-year WGH career, Tameka has proven to be a top-performing employee. She is ready to help others and genuinely cares for the patients. You can depend on her to help wherever she’s needed. She says her job is exciting because she is constantly learning and growing.

Last year Tameka decided to return to school. This may seem like an average step for most; however, Tameka’s circumstances are not “average.’ In addition to working as a full-time Medical Assistant, she is a wonderful full-time, single mother of two beautiful children – Jamari (4) and Ayanna (9). Her daughter, Ayanna, seems to be a lot like her mom, as she was honored at her school as the January Student of the Month. She is also a member of the Racial Reconciliation group of Troup County. This is a group that meets to discuss issues in an attempt to bridge the racial divide and create more unity in the community.

Tameka was accepted into a very competitive LPN program last August and is on track to graduate this summer. In addition to all of the aforementioned items, she was one of the first graduates of the Circles of Troup County. Last year she was awarded the Leadership Achievement Award by this organization. This award is given to individuals who have clearly completed accomplished goals.

On the surface, Tameka appears to be a little shy, not always smiling as much as she would like. However, she wants people to know that she is very approachable. When she is relaxing, Tameka likes to read, watch movies, and write short stories and poetry. Besides her children, she has a fish named Darwin.

We are very fortunate to have Tameka Johnson as a member of the West Georgia Health family.