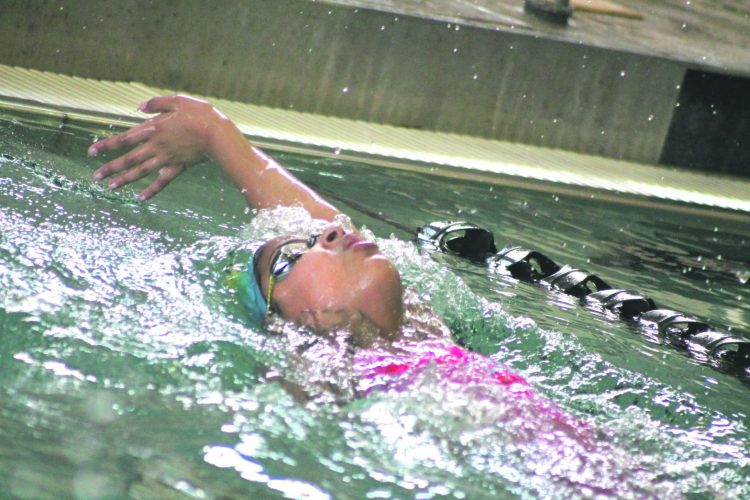 He doesn’t mind being pushed to his absolute limit.

That’s why Michael Loutzenheiser is a triathlete. He trains five to seven days a week, and he wins almost every time he competes. Training is competing for the 15-year-old triathlete from LaGrange.

“I swim, I bike, and I run. This is pretty physical. Seconds matter, and I complete my workouts day after day. I’m training harder, and I’m getting bigger and stronger,” said Loutzenheiser, the sophomore from Lafayette Christian School.

Trathlons are not for everybody, but Loutzenheiser is not everybody. He is a cut above the majority. He does go the extra mile. He goes from fast to off the chart.

“This is kind of like my sport. I have found my niche,” Loutzenheiser said after a time-consuming workout in the pool at the Mike Daniel Recreation Center on Monday afternoon.

The young Hercules has competed in triathlons in Richmond, Va., West Chester, Ohio, Tucson, Ariz., Sarasota, Fla. and Huntsville, Ala. He swims anywhere from 300 meters to 1,500 meters in the swimming portion of his competitions. From swimming he hops on a bicycle for a ride between six miles and 23.

And after getting worn down in the swimming and cycling sessions he has to run a minimum of 1.2 miles, and sometimes it’s longer, even uphill. Loutzenheiser has run as much as six miles in his triathlons, depending on the competition.

“This takes dedication. Sometimes the blood is rushing to my head. Sometimes I have jello legs. This is about having fun,” said Loutzenheiser.

Sometimes pain and fun are related.

“I’m gung ho. I have three shelves of trophies at home. I also have medals that go in a box. I have 50 or 60 of those (from triathlons),” said Loutzenheiser.

As for the swimming portion of his triathlons, Loutzenheiser has tackled the ocean, several lakes and some Olympic-sized swimming pools. He likes it all.

Pain is Loutzenheiser’s game. In last year’s triathlon nationals, Loutzenheiser finished in the Top 25 in the 13 to 15 age group. He hopes to go even higher and a lot faster this year. His best time ever in a triathlon is 30 minutes.

He has already made the Southeast Junior team with the top triathletes from Georgia, Florida, Tennessee, South Carolina and Alabama. Michael Loutzenheiser is an elite level athlete, and he has been competing in triathlons for just four years.

“Michael is motivated, and he has found something that he really likes,” said Gary Loutzenheiser, who is the triathlete’s grandfather.