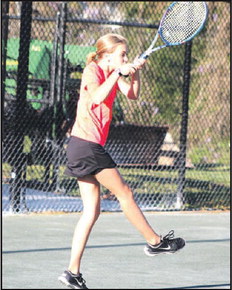 Behind the smiles were some sizzling backhands, some nasty forehands and a constant need to outplay each other.

Annie Pauley and Wone Mi are tennis players of the competitive kind. They want to win whether they’re playing a USTA match or a practice game. On Monday night the 13-year-old Pauley and the 12-year-old Mi got on with it, one set at a time.

Mi and Pauley exchanged good shots and glares. They tried to outdo each other, friends or not, and they do like each other off the court. The match was serious and intense. It did matter who won.

“We’re kind of on the same level, and she can hit it hard,” said Pauley.

Mi paid her friend and competitor a few compliments, too. “Annie made me run, and she hit it deep,” said Mi.

The match at the Mc-Cluskey Tennis Center was for bragging rights, and it was more than 60 minutes in length. Mi made more winning shots than Pauley did, and Mi walked off the clay court with a green-tinted 6-3, 6-4 victory.

There was no gloating, but there was a handshake at the net when the match was good and done.

“I ran a lot. I used my forehand and some slices. I do take lessons,” said Wi. “This is the only sport I play, and I’m in some (USTA) Tournaments.”

Both girls, Wi and Pauley, earned some shade and some water on this sunny evening. LaGrange High tennis players Jackson Kuerzi and Pierce Skinner spent this semi-humid night on the tennis court as well. They served, volleyed and swung hard from the most awkward of spots on the court.

Kuerzi and Skinner played until the sun set. It was practice.

“I play five or six days a week. I’m trying to get a lot better,” said Skinner, who plays singles and doubles for the Grangers.

Skinner is in the starting lineup with nine wins on the season. Kuerzi is having a winning season for LaGrange High, too. Kuerzi has a 10-2 doubles record for the Grangers. Kuerzi is always trying to take his game to new heights. Backtracking is not what he wants to do.

“If I don’t come out here and play I’d get rusty. La-Grange has a lot of good tennis players,” said Kuerzi, a sophomore. “I’m working on my serve, and I’m trying to play smart.”

So Kuerzi did play some practice sets with Skinner, the LaGrange High freshman. Both players are better for it, and they don’t feel guilty. Kuerzi and Skinner did their homework.