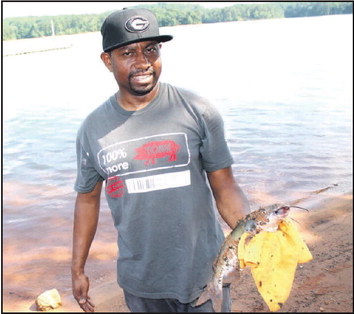 Fishing is only as good as the person holding the fishing pole.

On Thursday afternoon, Fred Reeves of Atlanta was doing some of the holding and some of the catching. Reeves is a fisherman of note and crickets. Reeves baited up with the crunchy little critters and caught nine bream and two catfish at the Pyne Road Recreation Park along West Point Lake.

Reeves has to confess. He had some help. Paulette Louis of Metro Atlanta did some of the casting and the reeling, too.

“This is relaxing, and I’m a learner,” said Louis.

But after she caught her first bream of the day, Louis said, “I’m not that bad after all. Next time I’ll get an even bigger one.”

Louis did get some more fish, mostly bream. Her boyfriend, Reeves, was doing some coaching and catching. Reeves caught four bream in his first 30 minutes on the lake, and Reeves was fishing from shore. He was fishing on the bottom, and he was in the shade.

“I’ve been coming here (at West Point Lake) for the last 15 years. I like the atmosphere and the people. I feel safe. It’s not like I’m on someone’s private property fishing in the woods,” said Reeves. “I’ve been loving this lake since I was a kid. My mom used to bring me here. I started catching crappie, and I even caught a 4-pound largemouth bass. I’ve caught some big catfish here, too.”

Reeves’two catfish on this afternoon were 2-pounders. They, too, were caught with crickets on the bottom.

“Some of the biggest fish that I’ve caught were at West Point (Lake). I catch fish when I come here. I like the air here, too. It isn’t bad like in the city. LaGrange has a down home feel,” said Reeves. “LaGrange keeps its traditions.”

And fishing is near the top of the list.

Thomas Tarrer of Columbus was fishing out of Pine Road Recreation Park as well. He, too, was reeling in some nice ones. Tarrer caught seven largemouth bass on Thursday. This angler was using plastic worms and all artificial lures from his bass boat.

“I was fishing in deep water. On one of my catches I was fishing near a tree in 25 feet of water. My fish got wrapped around a limb, and I sat there for 15 or 20 minutes,” said Tarrer.

He finally pulled in that 5.5-pound largemouth bass after the fish got untangled. Tarrer also let the largemouth go, along with his other six bass.

“I released them so I can catch them again,” said Tarrer, who was using 15pound test line.

Bobby Wilson’s fishing luck wasn’t quite as extensive as Tarrer’s.

“I caught not a one,” Wilson said. “West Point Lake has a variety of fish with largemouth bass and spotted bass. The water is clear, and there’s a good breeze. But we’re going into our summertime pattern (of slow fishing).”

But it depends on who is doing the fishing. Some anglers are still catching, and some anglers are catching a lot of bream and bass on West Point Lake.