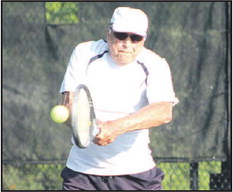 In the words of Tracy Hampton, “We drank a lot of water, and we feel good and tired.”

Hampton and her husband, Scotty, survived the stifling humidity and the unyielding competition. The husband and wife team from West Point also won the 7.0 mixed doubles title in the Charlie Joseph’s Lobbin’for Literacy Tennis Tournament on Friday night at the McCluskey Center in LaGrange.

“We got our adrenaline rush,” said Tracy Hampton.

She and her husband won 14 games in the tournament. The Hamptons also took home two tournament tshirts and two first place trophies.

Another husband and wife duo, Jim and Donna Jarzen of LaGrange, finished second in the 7.0 mixed doubles with 13 points. Jerry Key and his 15-year-old daughter, Kaylee Key, placed third in the tournament with 12 points.

There were eight teams and 16 tennis challenged players in the mixed doubles competition.

“The games were good, and they were all close. Anybody could have won,” said Bill Champion, the director of the three-day tournament.

The oldest player in the Lobbin’ For Literacy event was 84-year-old Marvin Edelson of LaGrange. Edelson played like a kid, and he waved his magic tennis wand for some winners.

“I made a couple of good shots. I enjoyed the competition, and we could have beaten every team (here),” said Edelson, who teamed up with Menakshi Gupta.

They did not win a championship on the first night of the tournament, but another team did. Fourteen-year-old Carlos Valdez of LaGrange and 53-year-old Sheri Bland of Callaway Gardens took home the tennis title in the 8.0 mixed doubles event.

Valdez and Bland shot up to the top with 15 points. Fire and ice did mix exceedingly well for these two doubles players. Bland brought the fire, and Valdez supplied the ice, and the slick forehand and backhand shots.

“Carlos was fast and lickety split. His topspin was a killer,” said Bland.

Valdez found some onthe- court chemistry with Bland.They didn’t win every point, but they won more than their share.

“Doubles partners have to work together well. We were competing and playing,” said Valdez. “Sheri was able to set up some points.”

Valdez and Bland faced some heavy hitters in all of their games. Dick Kilpatrick of Jasper, Ga. and Trish Logan of LaGrange weren’t too far behind with a second place score of 13 points.

“This was a lot of fun, but it was very tough. We saw different players and different serves. Joey (Keeth) had some spin, and Carlos (Valdez) had a very hard serve,” said Logan, who has played in the Lobbin’ For Literacy Tournament six times.

Keeth and Sharolette Rogers, two local tennis goliaths, were just a few wins away from finishing first in the 8.0 level event. Keeth and Rogers fell to third place, but just barely. They played almost well enough to win.

Two shots here and a serve there can be the difference between finishing first and third. That can happen in tournament play.