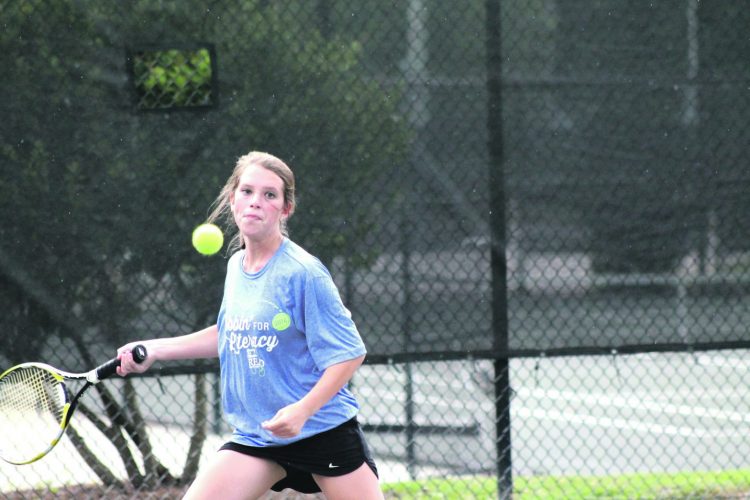 She had something that all of the other girls didn’t have – the tournament championship.

Kelsey Cadenhead, the sophomore from LaGrange High School, pulled away from the rest of the pack and rallied for the girls doubles mixer honors in the Charlie Joseph’s Lobbin’for Literacy Tennis Tournament on Sunday afternoon. Cadenhead had the winning touch with a final tally of eight points at the McCluskey Center.

The girl took it all in stride. Cadenhead played through some deficits, some raindrops, several claps of lightning and the rising sun. Cadenhead found a way to beat the odds and win a tennis title on the final day of the tournament.

“This was for experience and getting better. My volley and backhand were there, and I’m kind of happy,” said the 15-year-old Cadenhead.

Kaylee Key, another teenage talent, was just a few forehands behind Cadenhead. Key finished second in the doubles mixer with six points. It could have easily been first place for Key, who plays tennis for the Lady Grangers.

But any trophy is a good trophy for Key, who did get some hardware for winning her half-dozen games with the pressure on and the spectators watching from the bleachers.

“This was not my best day, but I did hit some crosscourt shots. This was good practice. If you don’t get out there and play you are not going to get any better,” said Key.

Lauren Yarbrough was battling, scoring and competing on this tournament Sunday, too. Yarbrough was just a few games short of the tourney crown.

“I played pretty good. I went to my forehand and my new serve. I was getting some backspin, and I tried as hard as I could,” said Yarbrough, the tall, lean and improving tennis player.

Jamie Livingston of LaGrange was also playing some high profile tennis on championship Sunday as well. Livingston is 16, and she made it as hard as she could for her tournament competitors no matter who they were.

And they were close.

“I’m with all of my friends. I’m stepping up my game, and I want to get better,” said Livingston.

She did that with some promising ground strokes. Livingston played with some flare. She grimaced at times, and she banged rackets with her teammate after every winning shot.

The doubles mixer teams changed players after every match. That is the way the game is played, and Livingston played it well point after point.

Besides girls doubles there was another title on the line at the McCluskey Center on Sunday as Brodie Kersey and Brett Smith went at it in the boys singles. Smith had the cleaner game and the tougher tournament nerves.

Smith took his total game to “Title Town” with a 4-0, 4-0 triumph. Smith was serving it up, and Kersey wasn’t able to return enough shots.