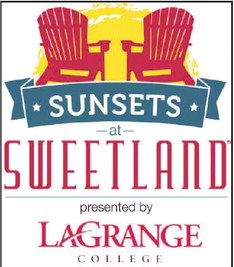 LaGrange College is presenting Sunsets at Sweetland, a summer music and movie series designed for the entire family.

“Part of the college’s mission is to reach out and be a meaningful part of our community,” she said. “And Sweetland is committed to having events that are accessible and affordable for everyone.”

Once located on Lafayette Square downtown, the music and movie series has moved to Sweetland’s great lawn, said Barbie Watts with the Downtown LaGrange Development Authority.

“Our events on the Square became so popular that we really needed more space,” she said. “Sweetland was the perfect solution.”

The next event is scheduled for July 1. “Red, White and Blue Friday” will feature a patriotic concert by the La-Grange community orchestra, followed by the film “Max.”

“‘Max’ is a very moving story about a military service dog in Afghanistan who suffers a traumatic loss and is adopted by his handler’s family in the U.S.,” Pirkle said. “However, parents of young children should know there is combat violence at the beginning of the film.”

All Sunsets at Sweetland events (except the one in October) are free and picnic approved, which means outside food and beverage may be brought into the venue. There will be limited concessions offered, and Adirondack chairs will be available on a first-come, first-served basis.

Other events announced are:

• August 5 – Music by the Alcotts, a guy/girl duo from Columbus. They will be followed by “Star Wars: The Force Awakens,” the latest installment in the Star Wars saga. The record-breaking film reunites Harrison Ford, Carrie Fisher, Chewbacca and C-3PO, and introduces a new generation of heroes and villains. Attendees are invited to dress as their favorite Star Wars characters, and photos can be taken with life-sized standups of Chewbacca, C3PO and BB-8. • August 13 – Battle of the Bands, featuring musicians from Troup County. The competition will spotlight two age categories – 18 and younger, and 18 and older, said Maggie McDonald of Pure Life Studios, who is helping organize the event.

“If a musician is 18 and playing with an adult band, we’ll place that musician in the older category,” she said.

Sweetbay, last year’s winner, will close out the evening with a concert. For more information about the Battle of the Bands, contact McDonald at 706-443-4838.

“The anticipated release date for public use is September 7, so we’ll be able to show it at Sunsets at Sweetland the very next day,” Pirkle said. “We’re pretty excited about that.”

September’s music act will be announced at a later date.

• October 21 – Panther Palooza, featuring the college’s annual Homecoming concert. This event is not picnic approved and will be affordably priced. More information will be released at a later date.

For more information about Sunsets at Sweetland, contact Martha Pirkle at 706-880-8245 or mpirkle @lagrange.edu or Barbie Watts at 706-298-4534 or [email protected] downtownlagrange. com.