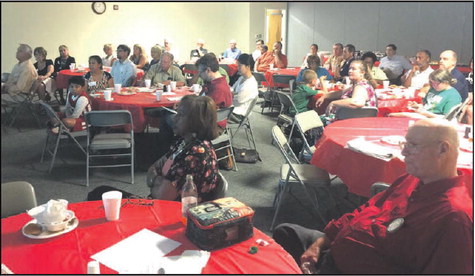 There was a different, more profound feeling in the air at this week’s meeting of the Optimist Club here in LaGrange. Optimist has always had a devotion to be a friend of the youth, a motto which has become the official slogan of the club. However, this meeting was different in nature. This particular meeting saw the new CEO of the local Boys and Girls Club, Mekos Denson, speak to the club about their upcoming goals for the year and also on their partnership with the Optimist Club and Camp Academia on the brain jogging program for children.

For many years now, the Boys and Girls Club has been dedicated to the success and growth of children all around Country. They have been a staple for families throughout the year and an example of how to lead our youth to the next generation of success. Here in La-Grange, Mekos, who has just recently taken over, and his staff have great plans for the future of the chapter.

They want to “inspire all young people, especially those who need [them] the most, to realize their full potential as productive, caring, and responsible citizens.” Their plans for the next year seek to accomplish these goals.

Over the next year, the Boys and Girls Club are going to focus on three things. First, they want to take large steps for more people to be involved with mentoring. It is one thing to donate fiscally, but what these kids really need are time and love. Next, they seek to provide several learning programs while maintaining and fun and relaxed atmosphere. Finally, they want their kids to feel as if they are in a safe and comforted society. In addition in seeking these three main goals, they also want to achieve academic success by helping kids get to graduation, keep kids in a healthy and fit lifestyle, and help build the leaders of tomorrow.

The other main focus of the lecture this day was to talk about the brain jogging program co-sponsored by the Optimist Club, the Boys and Girls Club, and Camp Academia. This is not a learning program, rather a functionary tool to help kids with their cognitive abilities. By seeing, saying, and spelling words in this special program, a child’s attention span, reasoning ability, and behavior are all drastically improved by completing this program. There was physical data to back this up as well. With the kids involved with the program, the second graders before the program scored at 62.5% above average. After the test, there scores were at 100%. There were statistics as well for 3rd, 4th, 5th, and 6th grade students as well. This program is not a replacement or opposition to programs taught in the schools, rather a tool to help with all around performance and growth designed to work with their current learnings and teachings.

This was a grand day for the Optimist Club as well as the local Boys and Girls Club. For so long these good people work on these programs and on days like this one, they were able to show their results to some of the distinguished guests that were in attendance. Yes, those that were there got to hear of many developments forthcoming with the Boys and Girls Club as well as seeing firsthand what all the Optimist Club in LaGrange has to offer.

If you are able to in any capacity, please consider supporting these clubs and their projects. Every child deserves a chance to learn, grow, and become the adults that we know they can be and they will thank you for it by being the harbingers of a better and brighter tomorrow.