Terry Rocks The Racket, He Rolls To Boys Doubles Title 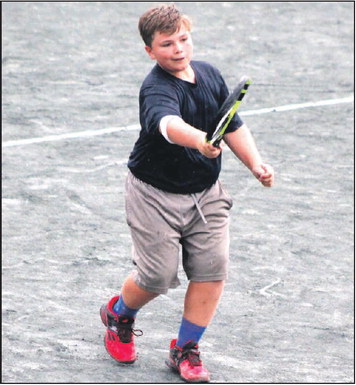 Naturally he had a strategy and a goal. Greg Terry doesn’t step on the tennis court without a purpose. He’s got some tennis smarts.

Terry makes it as simple as possible and to the point. By the way, on Sunday afternoon, Terry scored many points. He won numerous games. Terry ignored everything but his next shot. He played the entire court. Nowhere was off limits, including the net.

This was some meaningful tennis.

The 11-year-old Terry played the back line to the net and from one boundary to the next. He worked together, and Terry won some fame in the final round of the Charlie Joseph’s Lobbin’ For Literacy Tennis Tournament at the McCluskey Center.

Terry played from the seat of his pants. He was in total control, and he rolled to first place in the boys doubles mixer. When Terry was pushed, he pushed back and won the youth championship with 21 points.

He worked for what he got, which was a piece of the tennis action. And it doesn’t getting any better than sitting on the tournament pedestal, which is where Terry was when all was said, done and won. Terry is one of the best.

“This is pretty important, and it’s fun to win. I hit the ball where my opponent couldn’t get to it. I was really good with my forehand and my volley,” said Terry.

The doubles partners did switch after every match. Terry won with them all. Tim Jang didn’t do too bad either with a second place total of 17 points. Taegyu Eom did some slamming and sliding, too, with a third place score of 15 points.

Games were won and matches were lost, but nobody quit. The boys doubles players ran to the far corners of the tennis earth in search of one more winner. They gave up on nothing, and the players used every muscle in their limber bodies.

The boys left everything out on the clay courts in this celebration of tennis tactics and play.

“Our main concern is getting them out there and having fun. Every time the kids get out there they are getting better and more competitive. And it was great having their parents watching,” said Steven Vincent, a tennis pro at the McCluskey Center.

One of those parents who was watching was Audra Partin. She is a tennis mom, and she was on the edge of her aluminum seat as her son, Towson Partin, played and won from time to time.

“Tennis keeps Towson in shape, and he loves to win. He has a good dropshot and serve. He is athletic. Towson also plays baseball and football. He enjoys staying active and competitive. This takes a lot of practice,” said Audra Partin.