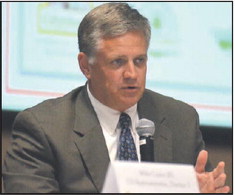 Ferguson received strong support throughout the district, winning nearly every county with the Newnan based businessman, Crane, only winning Fayette and Coweta County.

He will need that support again if he hopes to defeat Angela Pendley in the November 8 general election. Pendley is a Democrat out of Grantville.

Either Pendley or Ferguson will replace retiring Republican Congressman Lynn Westmoreland, of Newnan. Westmoreland has served Georgia in the House of Representatives since 2005.

Despite his connection with Newnan Westmoreland endorsed Ferguson to take his seat and was on hand Tuesday night celebrating with the nominee at the Depot in West Point.

Ferguson is a rising star in the Republican Party after helping bring the Kia Motor Manufacturing of Georgia plant to West Point. The plant has helped revitalize the City of West Point by bringing millions of dollars into Troup County and many much needed jobs.

Hunt received 127 to Asbell’s 38, easily beating him by more than 50 percentage points.

Hunt has lived in the La-Grange for nearly 40 years and taught in the Troup County School System for 30 years until her retirement in 2010.