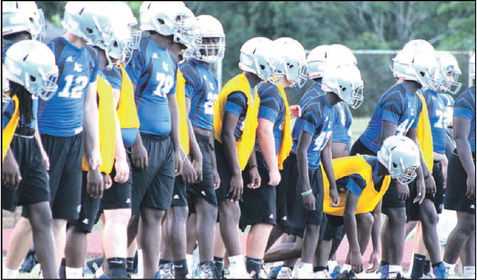 One thing is for sure.

The 5-foot-9, 165-pound game breaker is on the mend. Perry is staying upbeat, but there is a possibility he could miss the entire season. But Perry is doing everything he can to get back on the field this year.

“I’m going to physical therapy three times a week. I’m going to come back better and stronger. God has a plan and a reason (for this). I’ve been playing football since I was seven or eight, and I still love it,” said Perry.

Despite recovering from groin surgery, Perry does plan to stay involved with the Granger football program. He was seen throwing the football in the Granger gym on Tuesday afternoon.

Perry also put in an appearance at the Grangers preseason practice on Tuesday night. The LaGrange High quarterback had a football with him as he walked around the track repeatedly. Perry watched the other Granger quarterbacks throw in a number of different drills.

“I still want to be a leader. I’m going to come to practice (this season). But this still feels weird. I’m hoping I can come back sometime in September (and play),” said Perry, who is being recruited by Purdue, North Carolina State, East Carolina, Army, Tulane and Cincinnati.

Perry isn’t giving up on playing this year. He knows what he is capable of when entirely healthy. Perry rushed for 1,400 yards and 11 touchdowns last season. Perry also zeroed in for 1,450 yards through the air. Perry had 14 touchdown passes in 2015. Grangers head coach Dialleo Burks already misses Perry with every snap of the ball in this preseason.

“This is a huge blow. Laperrion brings energy to the field. He can strike from anywhere (and score). He brings leadership. Laperrion is a natural football guy,” said Burks.

Starting in place of Perry, at least early this season, will likely be Grangers senior quarterback Amad Ogletree. There will not be a big drop off in ability with Ogletree taking the snaps. The 5-foot-10, 170-pound Ogletree is a take charge kind of talent.

He started 11 games at quarterback for LaGrange High two years ago.

“I’d rather be a running back, but I want to help this team. I can run and throw. I’m a power runner, and I have some experience,” said Ogletree. “I have some skills.”

LaGrange High will kick off the season on Aug. 19 versus Callaway at 7 p.m.