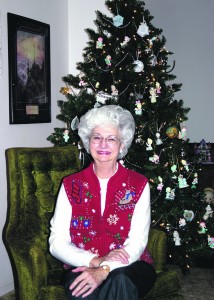 Mrs. Nancy Ruth Tyson Sledge passed away on July 28, 2016 at her residence. Mrs. Sledge was born on November 3, 1934 in Five Points, Alabama to the late Dewey Trent Tyson and Sara Lorene Williams Tyson. She was preceded in death by her father on December 6, 1955, her sister, Helen Tyson Reed Cannon on December 14, 1964, her brother, Dewey Winfred Tyson on June 1, 1992, her mother on December 29, 1997 and her sister, Joann Loviz on October 10, 2012. She is survived by her husband, Alfred Frank Sledge; five sons and their wives, Roger Frank and Angie Sledge of LaGrange, Rickey Wayne and Kristen Sledge of Roanoke, AL., Kenneth Darrell Sledge,  David Charles (Terri) Sledge, Phillip Lynn and Kimberly Sledge of LaGrange; nine grandchildren, Sandy Suzanne (Lee) Cobb of Roanoke, AL., Steven Wayne (Valerie) Sledge of Roanoke, AL., Dustin Cee Sledge of LaGrange, Carley Renee (Joey) Harper of LaGrange, Adam Frank Sledge of LaGrange, Phillip Landon Sledge of LaGrange, Gabriel Wayne Sledge of Roanoke, AL., Cason (Jessica) Dreman of Athens and Colby Dreman of LaGrange; nine great grandchildren, Bruce Cobb, John Allan (Trey) Williams lll, (Tre’) Ruston and Camdon Wayne Sledge, Olivia Shea Cobb, Lillie Snow Sledge, all of Roanoke, AL., Oaklie Raine Harper, Memphis Reed Harper, both of LaGrange; very special caregiver, Rebecca Parkerson.  Nancy was a dedicated Christian having been baptized a the First Baptist Church of Shawmut at the age of 15. She attended grammar school at Five Points, Alabama.  The family moved to Shawmut, Alabama where she attended Shawmut Jr. High and Valley High in Fairfax, Alabama.  She was very popular and active as a teenager. She was a Cheerleader for the Shawmut Football Team. On February 16, 1952, she married her childhood sweetheart, Franklin Sledge of Shawmut.  The Rev. Maurice Hodges performed the wedding at the First Baptist Church Pastorium in Shawmut. The witnesses were the late Mr. and Mrs. George T. Hollis, the sister and brother in law of the groom, and Ruby Jo Cole, and the late Christine Bruce. After her marriage, she moved to Oxnard, California to be with her husband who was serving in the United States Air Force and stationed at Point Magu Naval Air Station. Later they were transferred to Tinker Air Force Base at Mid West City, Oklahoma. Their first son Roger Frank Sledge was born on November 10, 1953.  Frank was transferred to Landstudl Air Base in Germany while Nancy and Roger returned to Shawmut while he was away. On May 6, 1955, Frank received and honorable discharge and was employed with Independent Life Insurance Company and they moved into their home in Shawmut. Later his work took them to Opelika, Gadsden, Phenix City, Lanett and back to Shawmut.  Nancy taught Special Education at Valley Haven School in Lanett, Alabama.  God blessed them with five wonderful sons and all the family, except the baby boy Phillip, became members of Shawmut First Baptist Church. In June of 1970, Frank was called into the Ministry and in August of 1970, they sold a grocery store and put their home on the market and moved to Chipley, Florida to attend Florida Baptist Theological College in Graceville, Florida. The family church membership was moved to Blue Lake Baptist Church in Chipley.  Phillip received Jesus as his Lord and Savior, and Pastor Bobby Roan allowed Phillip’s dad to perform the Baptismal Services. This was the first Baptism in Frank’s ministry. While attending Baptist Theological College, they served as Pastor and his wife at Damacus Baptist Church in Florala. After graduation, they were called to Handley Avenue Baptist Church (later relocated and renamed) Trinity Baptist Church in Roanoke, Alabama. After eight plus years, they were called to the Franklin Road Baptist Church in LaGrange, Georgia. Their service here as Pastor and wife covered 20 years. Nancy has always been a dedicated wife supporting her husband throughout his ministry, a wonderful mother and a Christian friend to many. She served as the first Director of the Pre-K at Franklin Road Baptist Church. Visitation was at the Higgins LaGrange Chapel Funeral Home on Friday, July 29, 2016 from 5-8 pm. Funeral services were held on Saturday, July 30, 2016 at 2:00 pm at the Franklin Road Baptist Church, 1424 New Franklin Road, LaGrange. Mrs. Sledge will lie in state at the church one hour prior to the service. Rev. Andy Buchanan and Rev. Andy Hall officiated. Entombment followed at Restlawn Memory Gardens on Mooty Bridge Road in LaGrange. Flowers will be accepted or donations may be made to The Sons of Sledge Alzheimer’s Walk Team at 99 Meadowland Trail, LaGrange, 30240 or to Hospice LaGrange at 1510 Vernon Road, LaGrange, 30240. Online condolences may be sent to the family at www.higginslagrangechapel.com.

Higgins LaGrange Chapel Funeral Home was in charge of the arrangements.

Mr. Forrest Edward Abney, age 84, of Valley, Alabama passed away on Monday, July 25, 2016 at the Golden Living Center in Lanett, Alabama. Funeral services were held on Thursday, July 28, 2016 at 2:00P.M. at the Johnson Brown-Service Funeral Home chapel in Valley. Interment followed in Marseilles Cemetery in West Point, GA. The Rev. Chuck Anderson, the Rev. Perry Duffey, and the Rev. William (Bill) Williams officiated. Mr. Abney was born on April 3, 1932 in Lanett, Alabama on 7 Grant Street, which is now known as south 12th Street in Lanett. His parents were the late Izora Lashley Abney and the late Thomas Allen Abney. Mr. Abney is survived by his wife, Juanita Abney, Valley; children, Forrest Eugene Abney, Gail Juanita Abney (Trey Lindstrom), Cumming, GA; grandchildren, Chapman Lindstrom, Kirstin Lindstrom, both of Cumming, GA., John Abney, Alpharetta, GA., Paige Abney, Cumming, GA. Three of these grandchildren are now in college and Paige, the Caboose, has 8 years to wait. He is also survived by his brother-in-laws and sister-in-laws, Phillip and June Majors David Majors, Allen and Pat Majors, Carolyn Pritchard, all from Lanett, Shirley and Barney Austin, LaGrange, GA., Stephen and Gail Majors, Ozark, AL.; and a host of nieces and nephews. Forrest Abney was drafted January 28, 1953 at the age of 20. He said this was the beginning of his life because he had very, very little change. He spent 21 years and 11 months in the Army and the Alabama National Guard. This was a great improvement in his life in that he fell in love with all the men that he came in contact with and today continues to send those Christmas cards. He was a city letter carrier in the West Point Post Office. He was appointed to the rural letter carrier position by President Richard M. Nixon. He was a member of the Georgia Rural Letter Carriers Association for 35 years and was a paid delegate for 27 of those years. His membership in this association gave him the opportunity to travel the country in a motor home to 49 states. When Forrest retired on July 3, 1989, he and Nita went and lived in Hawaii for 30 days. He was a member of the Alabama American Legion, District 24. He served as membership chairman and the 24th District Commander. He was also a member of the Veterans of Foreign War, the Disabled American Veterans, and served as membership chairman. In addition, he served as the public relations officer and helped many members to get assistance and help with their disability benefits. He and his wife, Nita, helped to raise money for the disabled American veterans to purchase a new van. Mr. Abney requested that all members of the National Guard of his day be honorary pallbearers. Please visit our website at www.johnsonbrownservicefh.com to sign the online guest book.

Lakes-Dunson-Robertson Funeral Home was in charge of the arrangements.

Charlia Jo Spratling, age 87, of Pine Mountain passed away Monday at her home. She was born October 25, 1928 in Chipley, the youngest of eight born to the late, Will and Lollie Culpepper. She attended Chipley High School and received her GED from America School, Atlanta, Georgia; and retired from Callaway Gardens after twenty-five years of service. Sister Spratling was a faithful member of Bethany Baptist Church where she held several positions; and was an active member of the the Western Union Association. Survivors include her children, James Spratling, Pine Mountain; Robert (Linda) Spratling, Stone Mountain; Gwinnetter Smith, Temple Hill, MD; Jacquelyn (Winston) Dozier, Oxon Hill, MD; Ernest Spratling, Pine Mountain; and Lynda Randolph, Ft. Washington, MD; seven grandchildren, 19 great grandchildren, five great-great grandchildren, and a host of nieces, nephews, and relatives. The Celebration of Life Service was held on Monday at 1:00 at Bethany Baptist Church. Burial followed at the Church Cemetery. You may express your condolences or sign the guest book by visiting www.lakesdunsonrobertson.com.

Lakes-Dunson-Robertson Funeral Home was in charge of the arrangements.