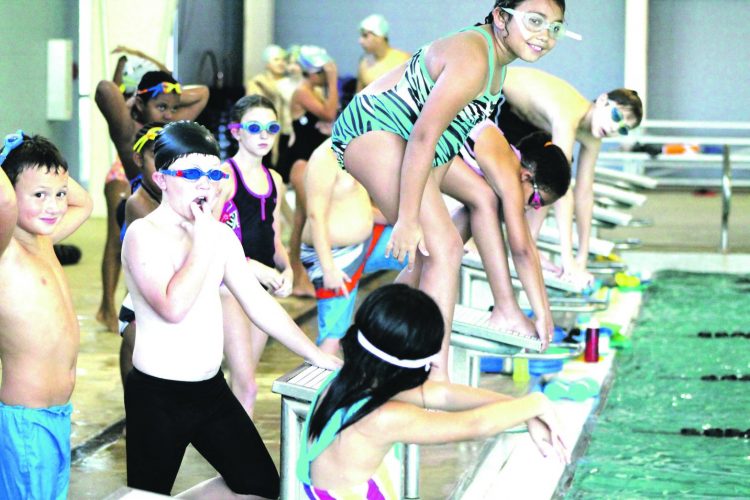 America’s showcase performance in the Summer Olympic Games has had a positive influence on some athletes in LaGrange.

During just the past week 10 new swimmers have joined the Troup County Sharks, and more seem to be on the way. Some future Olympic champions are waiting in line to get a crack at a roster spot on the Sharks junior team.

During Monday’s workout at the Mike Daniel Recreation Center, coach Kristen Moore was coaching her expanded roster of 16. Moore was also conducting a Sharks tryout for some future competitive swimmers.

The boys and girls have visions of gold, silver and bronze. Moore just wants to teach these waterbugs some basics.

The talent is there in the water, and so is the inexperience. Most of the new junior Sharks have never belonged to a swimming team. Genna Rochedieu, a 7 year old, is a coach in the pool for the Sharks.

Rochedieu has been a junior Shark for a year, and she is glad to see some new swimming talent. Rochedieu does have some advice for the beginners.

“They need to keep their eyes on the water,” said Rochedieu. “They just graduated from swimming lessons.”

Eight-year-old Ana Vega is one of the new Sharks.

“My moma signed me up. I just started. I took some swimming lessons this summer,” said Vega.

Harlyn Kline, a fourthgrader, has joined the Troup County Sharks, too. Kline is nine years old.

“I’m having fun. We’re swimming with (kick) boards, and we’re using flippers. I’m pretty good,” said Kline. “We get to practice, and we get to be with our friends.”

The junior Sharks had a 2-hour session in the pool on this afternoon. Brother and sister, Jayden and Sophia Jung, were there. They were diving, smiling and working on their freestyle strokes.

Sophia and Jayden Jung were enduring and going from one wall to the other. They were swimming, Sharks style.

“We’re making a big splash,” said 6-year-old Jayden Jung. “We need to practice, and we are getting better. They taught me the freestyle.”

Big sister Sophia Jung, the 8 year old, is getting a feel for the competitive waters, too. She’s a junior Shark from head to toe.

“I like the diving and the swimming,” said Sophia Jung.

And coach Kristen Moore likes the effort and the high swimming IQ. The beginners are learning.

Jayden Jung is conquering his fear of the water. The 6-year-old Jung is a new member of the Troup County Sharks swimming team.