Kimi’s Krew All Sails In 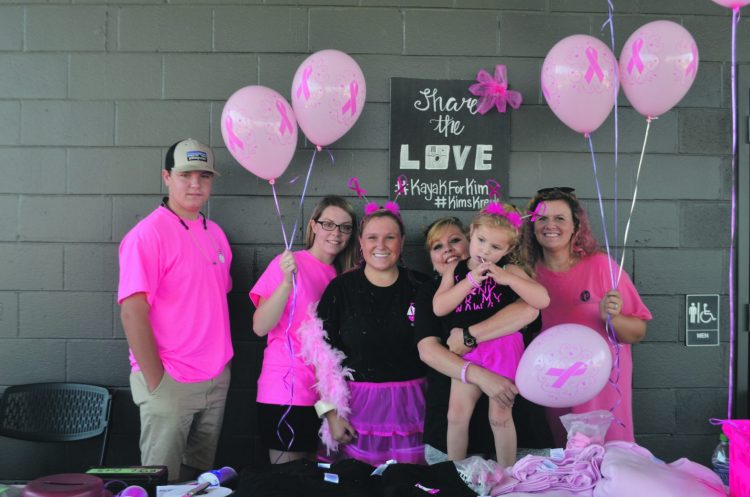 Most people have a hard time facing circumstances they can’t fix. Solving problems is an inherently human characteristic that insinuates a steady control over reality and unfortunately, no one can fix cancer. No one can crack the underlying codes of “How?” or “Why?” cancer exists. This is when boiling anger, crippling fear, and overwhelming stress tend to overtake the patient and his or her loved ones.

But, something, about Kim Murphy’s special Kayak Parade and Poker Run for her fight against breast cancer, made this a fundraiser like no other, a time when hurt, sadness, and frustration seemed non-existent. It was a silver lining – or rather, a pink lining of relentless expectations.

While family and friends gathered at the Downtown River Park Pavilion in West Point on Saturday, August 27, it was easy to feel the optimistic energy. Pink streamers were draped over anything that didn’t move. Pink hair bows were pinned in each little girl’s hair while the adults wore pink bandanas and pink tutus. Kimi’s canine cohorts also came out to show off their pink fur and pink collars.

But everyone came sporting so much more than the color pink. The countless people who showed up to support Kimi all had one other thing in common: they wore smiles. Friends giggled as they tried to play floating poker. Couples laughed at their own lack of coordination that comes with being kayak rookies. Even Kimi’s Daughter, Kayleigh Hester, featured a smile as she told the crowd that “We look forward to Momma being better and being here with us next year in the front line, on the first kayak, raising money for the next woman behind her.”

So, while no one has the scientific solution to cancer, Kimi’s supporters have found some answers all of their own. These answers might not be the ones to beat the disease, but they are guaranteed to defeat the emotional struggles that come with fighting this sickness. Because while it’s no secret that everyone who supports Kimi hurts for her, it’s the way they laugh and love for her, too, that makes all of the difference.

Anger, sadness, and fear unhinge the control and stability that people are so comfortable with, but those grief-based emotions can’t unhinge that which is unshakable. And it is laugher and love of Kimi’s Krew that are everywhere, which glow with energy, and are an unmovable force. Kimi’s Krew has joy, a God-given, steadfast joy, that radiates through Kimi and she takes on this battle against breast cancer in her own brave and beautiful way.

Come on out to the next event hosted by the “Cause We Love Kimi” Krew to experience this message of hope and love. At “Shimmy with Kimi” or “A Musical Evening to Benefit Kim Murphy”, Kimi’s Krew won’t have to say or do anything in particular for you to feel right at home in their supportive community. They won’t even have to dress in neon pink so you can see their support from miles away. Their laughter and love are all of the evidence anyone will ever need to feel welcome and to prove that they are “all sails in” for their unending fight for Kimi.