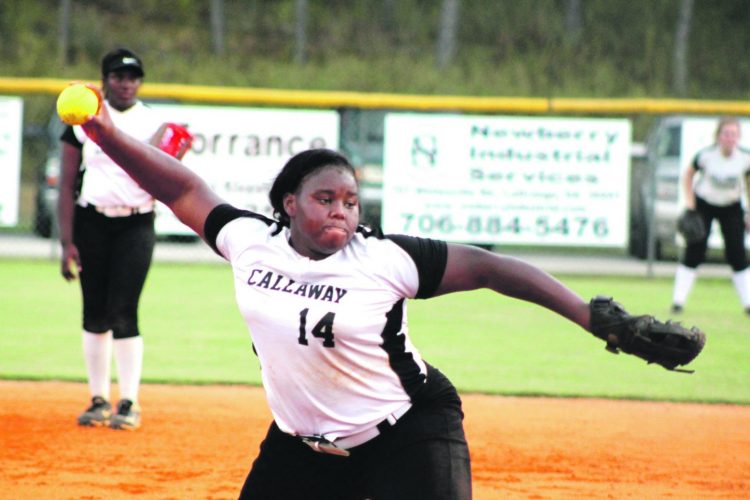 Youth was served on a silver platter.

Callaway High freshman Carley Turner stepped up to the plate with the score tied 10-10 against Temple in the bottom of the eighth inning on Tuesday night. There was enough pressure to gag a three-legged monkey.

The game was on the line. Turner was in the batter’s box, and she had the hopes of her team riding on every pitch and each swing. And Turner delivered like a seasoned senior, which she isn’t.

Turner took a Whitney Agan fastball and slapped it silly. Turner drove the ball to right field for the winning RBI. Callaway High squeezed past Temple, 11-10 in a Region 5-AA nailbiter. The winning Lady Cavaliers played some hard ball in this fast pitch softball game.

Turner’s game-deciding hit was her first and only base hit of the game. And it couldn’t have been more timely for the Lady Cavaliers, who bumped their record up to 8-12. Callaway is 2-4 in league play.

Squarely in the limelight was a freshman first baseman, who achieved some softball notoriety for herself and her team. Turner was a gamesaver for the Lady Cavaliers.

“We can always get it done. We were scared, but we stayed loud. We got focused, and we made an effort,” said Turner.

She did not win this softball game alone, however. Before Turner ended the game and ripped the ball, her teammates set the table for her heroics. Lady Cavalier freshman Kourtney Greer singled to left field in the eighth inning. Callaway sophomore third baseman Jasmine Dukes also did some talking with her bat.

Dukes slapped a two-RBI double to right field. Dukes later scored on a Temple throwing error. Earlier in the inning as well the Lady Cavaliers got an infield single from junior shortstop Kelly Carlisle. That was Carlisle’s third hit of the game. She had a double and two singles in the 8-inning region game.

The Lady Tigers from Temple (Carroll County) made every effort to win this game, too. Temple rallied from a 7-2 seventh inning deficit to force the game into extra innings. In the unlikely top of the seventh the Lady Tigers rallied with an RBI single from Mackenzie Holt, which was followed by a Whitney Agan infield hit, a two-RBI single from freshman Lindsey Green and a steal of second base from Green.

Temple freshman Cloey Gilham also had an RBI single in the top of the seventh. The Lady Tigers sent a message to Callaway. Temple wasn’t quitting. The Lady Tigers were playing this game for all that it was worth.

“We competed, and we became more of a team,” said Agan, who played third base and pitched in relief for Temple.

The Lady Tigers also plated a run with a Gilham RBI single in the first inning. Temple would score another run in the sixth inning with a Mackenzie Holt single, a Callaway fielding error and a Lady Cavalier wild pitch.

But this night and this game would still fall into the win column for Callaway High, which accumulated 15 hits, 11 runs and eight innings of highs and lows. The Lady Cavaliers could have taken a hint when lead off batter Kelly Carlisle, the junior shortstop, stroked a ringing single to right field in the bottom of the first.

Carlisle kept on running, too, as she scored on a Lady Tiger three-base error. Callaway High scored its second run in the third inning on a Dukes single to right field, an Oeisha Jenkins double to left field, a Jenkins stolen base and a Lady Tiger fielding error.

There was a little of everything in this girls softball game, including a bang-bang play at homeplate in the top of the fourth. Temple sophomore Carleigh Reynolds was tagged out at the dish by Lady Cavalier catcher Lydia Bartlett.

Callaway did make some plays on this night.