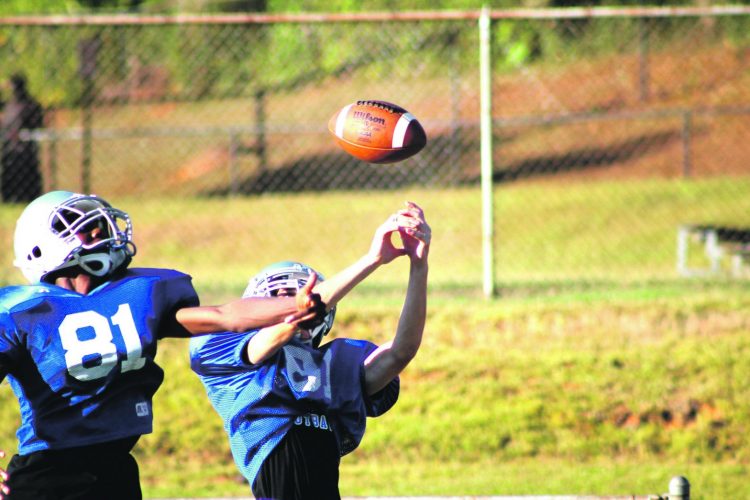 During the first five games of the season, Laperrion Perry has been charting plays, waiting his turn and watching the Grangers take one step forward and two steps back.

Perry, the senior quarterback for LaGrange High, has been on the shelf, on the sideline and recovering from groin surgery. Perry has also been agonizing as the Grangers got shut out twice against Griffin and East Coweta by the combined score of 93-0.

The popular and gifted field general for LHS also viewed a blowout loss to Callaway. Perry has been patient. He has gone to rehab. Perry has remained a loyal member of the Granger football family in spite of a 2-3 record (1-0 in the region).

Perry has been itching to put on his LaGrange High uniform again. He has missed half of the LHS regular season, but Perry is back now. He is almost 100 percent healthy. He scored on several scrambles at Wednesday’s Granger workout.

He laid some passes into the hands of his LaGrange High receivers as well. Perry’s zip is back, and so is his enthusiasm. No. 3 will start for the Grangers tonight in a Region 5-AAAA football game against Cedartown at Callaway Stadium. Perry and LaGrange will look to recapture some pigskin magic with a 7:30 p.m. kickoff.

“It feels good. I want to do the job and win some games. We will go hard. I’ve been working on my passing. We’re a good team, and we have to get even better,” said Perry, who has verbally committed to Purdue University.

LaGrange High senior center Jordan Ragan is just glad to have Perry back in the mix. Ragan thinks Perry could push the Grangers over the top in the region and beyond.

“Laperrion is going to open up our whole offense. He is a great athlete and a dual threat (running, passing). We’re going to score more points,” said Ragan.

Granger sophomore wide receiver Jamari Thrash is ready to catch some of Perry’s spirals down the middle and on the deep pattern. Thrash goes into the Cedartown game with three touchdown catches. Thrash is overjoyed with No. 3 back on the field.

“Laperrion is going to give us a spark. We’re going to move the ball downfield. We need to keep attacking. Laperrion brings leadership and quickness,” said Thrash. Perry also brings confidence with him to the football field and some uncanny moves. He drummed up more than 3,000 yards (rushing, passing) last year for the Grangers. Coy Tedescucci, the senior offensive tackle for LHS, is ready to block and spring Perry for some lengthy runs and some touchdown passes this year, too.

The Grangers are a different team with No. 3 on the field, in the huddle and on the loose.

“Laperrion is a gamechanger. He can get to the edge, and he is going to do some good things. He is a leader. A state championship is still in our mind (for this season),” said the 275-pound Tedescucci.

The Grangers have already picked up the offensive pace with Perry back in the fold.

“He looks good, and he is the fastest player that I have ever coached. He never makes the same mistake. Laperrion is coachable. He makes our offense more explosive, and I think he is the best player in the state,” said LaGrange High offensive coordinator Jay Floyd, the former All-Area offensive guard from Troup.

To say the least, the Grangers expect big things, more wins and an energized offense with Laperrion Perry back in uniform.