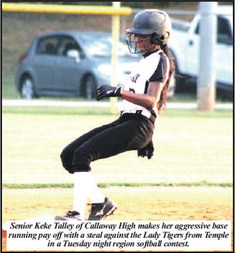 There was nothing normal or ordinary about the Temple-Callaway girls softball game.

It was Halloween scary. The game was weird. It made no sense. Callaway High School went from a 7-2 lead in the top of the seventh inning to a 10-7 deficit in the eighth inning. And the Lady Cavaliers still won the Region 5-AA softball shootout, 11-10 on Tuesday night in Hogansville.

Both teams endured every emotion in the softball book, and both the Lady Cavaliers and the Lady Tigers deserved to leave the field a winner. But just one team left holding the softball bag, and that was Callaway.

The Lady Cavaliers went the victory route with four runs in the bottom of the eighth inning. It was not conventional, but it was fast pitch softball. Callaway sophomore right-hander Oeisha Jenkins won the game with a 10-hitter, nine strikeouts and well over 100 pitches.

“We showed some fight. We caught some momentum, and we put the ball in play. Temple is not a bad team,” said Callaway High softball coach Ashley Summerlin.

When the bottom of the eighth inning began, the Lady Tigers were just three outs from winning. Temple went ahead 10-7 with a three-run rally in the top of the eighth. The Lady Tigers hit some rockets in the inning with a single from junior Ginger Holland, a double from freshman second baseman Aubrey Stockton and a two-RBI triple from junior third baseman/pitcher Whitney Agan.

The 10th run of the game for Temple came home on a Callaway High throwing error.At that point, with a 10-7 lead, the Lady Tigers looked like a sure winner. They had a bounce in their step and some sass on their lips.

“We got on with it. We’re tough, and we’re young. We started four freshmen and two sophomores. And we showed some fight,” said coach Larry Weaver of the Lady Tigers (5-16 overall, 1-5 in the region).

Temple was looking “prime time.” But that was only until Callaway left its calling card in the bottom of the eighth inning. The Lady Cavaliers used their bats for more than chasing away the horse flies. Kelly Carlisle got CHS rolling in the bottom of the inning with an infield single.

Carlisle then stole second base. Callaway sophomore third baseman Jasmine Dukes would eventually chase in two runs with a double. Dukes would touch homeplate as well on a Lady Tiger throwing error. That knotted the game up at 10-10.

Lady Cavalier freshman Carley Turner then untied the game and won it with a run-scoring single to left field. Dukes, Carlisle and Turner needed some oxygen after the four-run CHS rally in the eighth inning. The Lady Cavaliers battled, hoped and prayed. Where is that lucky rabbit’s foot?

“We thought positive. We were nervous, but our coaches were motivating us,” said Dukes.