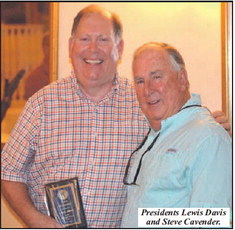 Horses and Carriages is a wonderful, high-end restaurant located in the wild beauty of Pine Mountain. The trip there is filled with open fields, backwoods roads, and quiet isolation. It is the perfect place to turn off the radio and reflect upon the year that you have had or any accomplishments that you have worked so hard to obtain. Such must have been the case for members of the Kiwanis Club of LaGrange when they held their annual end of the year dinner and celebration on Friday night, September 23.

The setting at Horses and Carriages was beautiful as many packed into the room, socializing and welcoming back faces they might not have seen in quite some time. After a gourmet dinner and a lot of talk, the actual showcase kicked off with the Happy Dollars tradition and then the acknowledgment of awards. Some of the awards given out that night were truly incredible. They started out with perfect attendance awards for Kiwanians that made an equivalent number of meetings throughout the years. Some of these members have even held their perfect attendance records for 30 to 40 years. They also acknowledged their board members including their program chair (Joyce Ellis-Johnson), the vice president (Ashley Adams whose father, Jerry Johnson, accepted for her), Tommy Pound, Casey Smith, Dean Hartman, Stephen King, Wanda Stribling, Jerry Johnson, and Sarah Webb. They also acknowledged their officers including Betty Patterson (immediate past president), Libby Willingham (secretary), Rose Sherrer (treasurer), and Steve Cavendar (president elect).

Cavender will officially take over the presidency from Lewis Davis, the new County Commissioner elect who will take over District 3 in January, who was also honored for serving the club over the past year.

Kiwanis also touched on all of the activities and charities that they have been involved with year after year, as they have raised great sums of money for various causes.

Radio Days, Happy Dollars, Terrific Kids, Key Club, the Christmas Parade, the Pancake Breakfast, the Clay Shoot, the International Convention, the District Convention at Callaway Gardens, the Cotton Pickin’ Fair, Circle K, the Club Social and Christmas Party, the Art Show, and the formation of new clubs are just some of the things that Kiwanis has been a part of this year alone.

They are so incredibly involved in their community, so much so that this year they donated $500 and some odd dollars to the Eliminate Project (a group that is dedicated to stopping maternal and neonatal tetanus) just from Happy Dollars alone, a total of somewhere between seven and eight thousand dollars total for this one project. They have also donated to Camp Viola, the Florence Hand birthday party, over $450 to Twin Cedars, $1,000 to the LaGrange Art Museum, the Boy Scouts, Key Club, $7,000 in college scholarships, between 12 to 15 hundred dollars on Terrific Kids, and around $1,100 between the audio verbal center, tomorrow’s leaders, Key Club, the Georgia district foundation, and Kiwanis International. In total, Kiwanis has put back over $11,000 into this community to help children.

They also made a special note of their club officers that are taking over for the 2016-2017 year. Those included are Libby Willingham (secretary), Rose Sherrer (treasurer), George Elkin (vice president and program chair), Jerome Alford (president elect), and Steve Cavender (president).

There are some terrific clubs and civic organizations here in this community and the Kiwanis Club is certainly near the top of that list. They are constantly giving back to the community, serving with their hearts, and never turning others away. They are a kind group of men and women who are dedicated to this community, its people, and helping kids all across the world. They will surely continue their legacy of excellence as the new year begins for them within the next week.