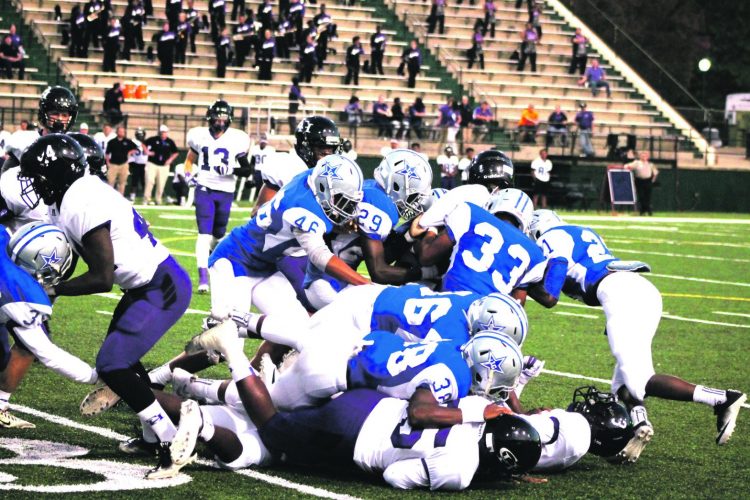 LaGrange High senior nose tackle Jonathan Olajubutu was emotionally and physically drained after all was said and done. He wore his No. 53 jersey proudly.

Olajubutu played his last football game for the Grangers on Thursday night. This defensive war horse gave everything that he had – every ounce of energy. What that got Olajubutu were a few regrets and more than a handful of lifelong memories.

On this night at Callaway Stadium, Olajubutu and LaGrange High battled to the final seconds in a 26-24 region setback to Chapel Hill. The 5-foot-8, 239pound Olajubutu had nothing to be ashamed of.

He laid it on the line, as did his LHS teammates. It was just that kind of a season – disappointing at 2-8. As for his final football game as a Granger, Olajubutu will never forget it.

There were some highs, some lows and some bonecrunching tackles for No. 53.

“Coach (Dialleo) Burks gave us a pep talk, and this game was high intensity. This is bittersweet. We don’t have a good record, but we fought to the end. Our defense ran to the ball, but this (ending) is still on the sad side,” said Olajubutu.

Yes, but what a finish. What a finale for the Grangers. The LaGrange High defense twice stopped Chapel Hill deep in Granger territory. LaGrange’s defense, led by Olajubutu, linebacker Rico Dunn, free safety Bo Russell and senior lineman Coy Tedescucci, put up the stop sign at the LHS 19 yard line with 2:49 left in the first quarter.

The Panthers were turned back with no points on that offensive possession. And again in the second period at the 8:03 mark, LaGrange High dug its heels in for another defensive stand. The Grangers put an end to that Chapel Hill drive at the La-Grange High 22 yard line. The Grangers had effort, guts and Tedescucci.

“We played our hearts out. We have a brotherhood (here at LaGrange). We had a chance to win. This game is on my heart and my mind,” said Tedescucci, the Granger senior.

Like Tedescucci and Olajubutu, LaGrange High senior quarterback Laperion Perry played his final football game for the Grangers in the loss to Chapel Hill. Perry has never played harder either.

The offensive magician took the tour of the ball yard with 20 rushes for 116 yards and a touchdown. Perry scored on a 4-yard touchdown bolt late in the first period.

Perry also had an urge to pass on this night. He was 11-for-17 for 97 yards with one touchdown and one interception. Perry, “The Playmaker,” was trying to make some plays and go out with a win in his prep football career finale.

He and the Grangers flirted with that muchneeded victory.

“We kept our heads up. We faced some adversity. Our team has heart, and in the second half we got some momentum back,” said Perry.

The running game returned for LHS as the Grangers scored on a Perry scramble in the third quarter. LaGrange High pulled to within one point of Chapel Hill at 19-18.

Chapel Hill would then push its lead to 26-18 on a Jadon Walker 5-yard touchdown pass to junior running back Tyre Shelton with 4:57 remaining in the third period.

Granger fullback Cornell Kendrick followed with a 6-yard downhill run in the fourth period. There was still 9:51 left in the game, and LaGrange High was breathing down the back of the Panthers. Chapel Hill led by just 26-24.

“We were determined. I’m proud of them. We locked down and focused,” said Grangers head coach Dialleo Burks. LaGrange High kept on grinding and competing. The Grangers had a 280-yard outing with 14 first downs. The Chapel Hill Panthers, who are 4-4-1 on the season, would scoop up 15 first downs and 251 yards in this game.

But the Panthers still had to stave off another La-Grange High drive late in the game. The Grangers got the ball into position to win, driving to the Chapel Hill 31 yard line with 1:56 left in the game. But the offensive drive unraveled after that for LHS, due largely in part to a personal foul penalty against the Grangers.

LaGrange High never got the ball past the 50 yard line again. The Panthers won the game on the road. Two of Chapel Hill’s touchdowns did come from its defense on a “pick six” interception return from sophomore safety Kyzheyone Burton in the second period and Tyre Shelton’s 60-yard fumble return for a score (also in the second quarter).

The Panthers were honored to leave the stadium with a win on this night in Region 5-AAAA.

“We had to stay disciplined. That No. 3 (Perry) is slippery. He is so athletic, but our kids fought and believed. LaGrange is still a top program, and I am proud to say I coached a team that beat LaGrange,” replied Chapel Hill football boss Justin DeShon.