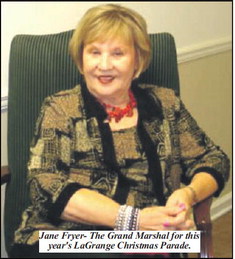 This year marks the 40th anniversary of the LaGrange Christmas Parade, and who better to lead such a special event than the lady who started it all?

Jane Fryer began investing in her local community in 1973 when she became the President of both the La-Grange-Troup County Chamber of Commerce and the LaGrange Development Authority. Only three years after her career began, Jane and other LaGrange-Troup County Chamber members from the Women’s Division Committee decided to create the LaGrange Christmas Parade. They wanted to invest in a meaningful, community oriented project, and they thought a Christmas parade would be the perfect fit for LaGrange.

Turns out, Jane and her fellow committee members were right. The LaGrange Christmas Parade continues to grow each year as churches, schools, businesses, and non-profit organizations come together and fill the downtown streets with music, lights, and the Christmas spirit.

After serving with the LaGrange-Troup County Chamber of Commerce from 1973 to 2008 and the La-Grange Development Authority from 1973-2011, Jane says she is incredibly honored to have been chosen as this year’s Grand Marshal. For decades, Jane was working hard behind the scenes at the LaGrange Christmas Parade. From passing out entry applications to choosing the theme, Jane was always busy with coordinating each year’s parade and was never quite able to make her own appearance. However, after so many years of being the one in charge of selecting someone else as the Grand Marshal, she has been the one chosen to take the lead and welcome the LaGrange Christmas Parade of 2016.

Jane Fryer, along with those who have made this year’s parade possible, would like for everyone in the community to attend and make the 40th anniversary of the LaGrange Christmas Parade one to remember. Come on out to downtown LaGrange this Thursday, December 1, at 6 pm, and enjoy the festive fun.