From An Entire Nation To A Local Town, This Hero’s Legacy Serves Us All 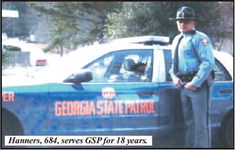 He trained only blocks away from the Eiffel Tower and trudged through Germany’s deep snow. He slept on the jungle floors of Panama and leapt out of a hot air balloon in Scotland (Don’t worry – he had on a parachute). He lived in Italy, frequented Switzerland and Ireland, and somehow found his way back home to America.

Phillip Hanners Jr. began his military career at the age of 17. Right out of high school, he followed the advice of his father and a local recruiter as he signed the papers to become a member of the United States Army. “I always knew that I wanted to be a Grunt”, Hanners said. From there, his basic training began at Fort Bragg, North Carolina, and shortly after that, he and his company were stationed in Vincenzo, Italy. For the next year-and-a-half, Hanners mastered the field training of an 82nd Airborne Ranger. Whether in the heart of a city or the outskirts of a rural community, whether in the blistering heat or the freezing cold, he and his cohort travelled all across Europe and other worldwide countries to learn the necessary skills of fight and survival.

After six years with the Army, Hanners served the U. S. Navy for an additional 18 years. 17 of those years he served as a Naval Reservist, but 9/11 demanded his active duty for an entire year where he was stationed at NAS (Naval Air Station) Pensacola as a Military Policeman. His outstanding career with the Navy landed him the position of MA1 Chief, and he later retired with that title in 2009.

Along with the Naval Reserves, Hanners served as a Georgia State Trooper. But first, he worked as a jailor with the Troup County Sheriff’s Department for three and a half years. After working with the TCSD, Hanners became a radio operator for the Georgia State Patrol (GSP), but he knew his dream was to patrol on the road. Following in his father’s footsteps, Hanners signed up for Trooper School. He came out of training ranked in the top division of his 73rd Trooper School class, marking the beginning of an 18year career packed with public service and community outreach.

“I always knew I wanted to patrol”, Hanners said, but what he didn’t know was that his job would land him the opportunity to pass on his love for the GSP to someone who has become so special to him. One of the hardest wrecks Hanners had to work was his first fatality. A mother swerved to miss a deer early one morning, and her vehicle flipped. Travelling with her were her two sons: four-yearold Austin and eight-year-old Anthony. Austin didn’t survive the wreck, but Anthony and his mother, Jackie, did.

“She [Jackie] said that when she woke up in the hospital, I was the first person she saw,” Hanners said. He was there at the hospital when the coroner arrived, there when the grandparents wanted to view the body, and he was there for the rest of this family’s lives. Hanners and Anthony kept in touch, and less than one year ago, Anthony graduated from GSP’s 97th Trooper School (ranked in the top division of his class, too). Hanners had inherited his father’s badge number: 684, and since Hanners retired from GSP in 2012, he had the opportunity to pass 684 on to Anthony.

Though Hanners is retired, his legacy of service, from the U.S. Army and Navy, all the way to the Georgia State Patrol, is not forgotten – it is carried on by those who have been impacted by his selfless sacrifice.

Troup County News thanks Phillip Hanners Jr. for showing this community what it means to truly follow The Golden Rule of putting others before self.