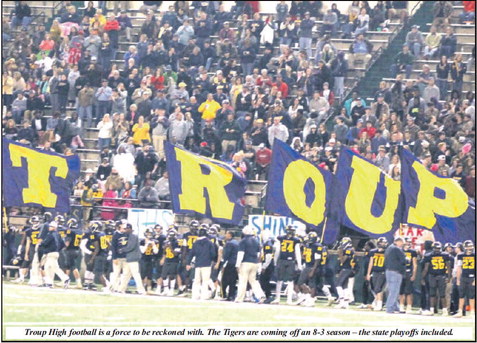 Troup High School’s bounce back football season not only resulted in eight wins this fall, it also meant the Tigers have some of the most coveted players in Region 5-AAAA.

That is the opinion of many. The Tigers were a landslide winner on the All-Region team. Twelve Troup High players were selected either first or second team on the 5-AAAA squad.

And that does bring some postseason joy to the Tiger football program, which went 8-3 this year. Coach Tanner Glisson of THS believes this All-Region recognition was earned.

“This is pretty good from where we came from. We had only two guys make it last year. Our guys are coachable. They put the team first, and they had a hunger to compete,” said Glisson. “We have character kids and blue collar kids.”

And on that hard working Troup High team was a bunch of All-Region types. Topping the list for the Tigers is senior running back Camren Russell. He rushed for 881 yards and scored 11 touchdowns. Russell is a first team All-Region player.

But he isn’t the only one from Troup High School. Joining Russell on the first team is Tiger freshman wide receiver Kobe Hudson. He caught 25 passes for 664 yards and nine touchdowns this year.

Wreyford was a gamechanger, too, with a 38-yard punting average and a total of 38 extra point kicks. Wreyford made three of five field goal attempts as well. He also booted the ball into the endzone 39 times on kickoffs this year.

Crowe led the Tigers this year with 1,920 yards passing and 18 touchdowns. Truitt was a consistent Friday night performer, too, with 29 catches for 526 yards and four touchdowns.

Stafford was on the run, too. He made 52 tackles with 10 assists forTanner Glisson’s Tigers.