Warriors Show Some Promise; Modi: “Everybody Is Chipping In” 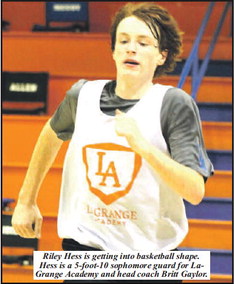 Sometimes it takes a freshman to put everything into perspective.

Ujwal Modi is one of those naïve yet brilliant ninthgraders over at LaGrange Academy. Modi goes to school by day, and he plays basketball for the Warriors during his remaining waking hours.

Modi is proud to be a Warrior, and he thinks this could be a banner year for LaGrange Academy on the basketball court.

“We’re still improving. We’re still young, and everybody is chipping in. We just need focus, and we need to pressure the shooters,” said the 5-foot-6 Modi.

Through the first two outings of the season the Warriors were 1-1. LaGrange Academy is trying to find itself. One mere returning starter is back for the Warriors this winter with 6-foot-6 senior forward Lincoln Anderson.

But according to the freshman, Modi, “We’re having fun, and we’re competing.”

The Warriors have had some early season success with a 48-34 win over Brandon Hall. The LaGrange Academy boys also lost to Trinity Christian, 58-52. The Warriors could easily be 20 instead of 1-1.

But LaGrange Academy head coach Britt Gaylor thinks his team is in a good position. Basketball championships are won in February and March, not November.

Gaylor is trying to be patient with his multi-talented basketball team.

“We’re scrappy, and we’re intelligent.We’re playing well on defense. A lot of times we’re taking the right shots. We’re going to learn, and we want to attack the rim. We are getting the ball to Lincoln,” said Gaylor.

The Warriors are also taking some sweet jump shots, the kind that find the bottom of the net.

“Mason (Brown) is shooting well, and Nick Keating is shooting the ball well,” said Gaylor, who fully expects his team to play in the State Tournament again this year in the Georgia Independent School Association.

Haynes and Dougherty do fit in at LaGrange Academy.

“We need to play to our strengths, and our leaders need to go hard. We are playing alright, but we need better footwork,” said Dougherty, a starting guard for the Warriors.

Haynes is glad to have a roster spot on this Warrior team, too. He is brutally honest.

“We have a long way to go,” said Haynes, who still can see a lot of potential for this year’s Warrior team.

Anderson, the two-year starter for LaGrange Academy, is glad to take it from there. He is the straw that stirs the Warriors carbonated beverage. Anderson isn’t about to sell this LaGrange Academy team short.

“We’re good. We are making plays. We are smaller this season, but we have tenacity,” said Anderson.

“We need to protect the ball. We do want to win a region championship,” said Anderson.