Troup Takes First In Douglasville; Garner: “I Love This Team” 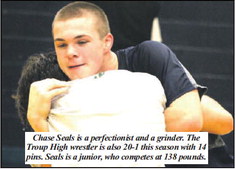 The Tigers are chasing perfection and winning tournaments. What else is new?

Troup High wrestling is making a daily statement this year. The Tigers are forging ahead with a No. 6 state ranking and a 16-2 record. Troup is hanging its hat on hard work.

That very thing showed up for roll call at last weekend’s Chattahoochee River Wrestling Association Tournament in Douglasville. The Tigers outfought and outscored Alexander, 272-267 for the team championship. Central Carrollton and Northgate pinned down third and fourth place.

But it was the state ranked Tigers who took home the team title and the prestige.

“I love this team. We want to win everything. Our conditioning was a huge factor, and we have wrestlers with good values and high character. Wrestling still comes down to technique and how hard you work,” said Troup High head coach Craig Garner, the ex-state wrestling champion from THS.

This Tiger program is going places once again.

Sophomore Pearson Strickland was one weight division titlist for the Tigers. Strickland won the 106pound crown.

“I have a no quit mentality. I came to wrestle,” said Strickland.

Junior Brantley Robinson put in the time and the points for Troup High as well. Robinson, who has a 12-3 season record, won the gold medal at 126 pounds.

Troup High senior Trey Harris was a tournament champion, too, at 152 pounds. Harris is an every day wrestler with good morale and refined moves.

“We have the techniques and the practice,” said Harris, whose body of work includes a record of 15-5 with eight pins.

Scott Hicks, a leader and a sounding board for the Tigers, took another weight division title for Troup High. Hicks is down to the nub and the mat with a season mark of 15-2 with 14 pins.

He combines muscles, smarts and winning techniques. Hicks doesn’t look for the easy way out. He is there for the duration, three periods if necessary. Hicks works before practice, after practice and during practice.

And he isn’t looking to see if the coaches are watching.

“We have heart. We push, and we work every day,” said Hicks, who wrestled in the 160-pound class in the Douglasville meet.

The Tigers also managed to get a weight division title out of Chase Seals, the junior. He capped off the Douglasville tournament with a championship in the 138-pound division.

Seals has a chance to be a state champion one day. This could be the year, too. The Troup High ultra competitor has come a long way. Seals has much further to go, but he is still rocking a 201 record for now. Seals has 14 pins in 21 matches this season.

He knows how to finish with some flair. Troup High wrestling is making some strides, and the Tigers are acquiring some titles. Troup has won two tournaments this season – at Carrollton and Douglasville.

Last weekend, Troup High also had junior Quenton Kersey wrestling from ahead and from behind depending on the match. Kersey was grinding in the 195-pound weight division.

Kersey was the runner-up in his weight class, and he is one of the most improved Tigers. Kersey has compiled a 16-3 record this year with nine pins.