Family And Finances Strengthened Through Circles of Troup County 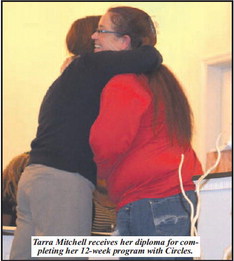 Many participants who graduate from the Circles of Troup County program describe the staff, volunteers, and their fellow students as family. When these people come together to discuss their struggles and help one another seek solutions, 12 weeks become plenty of time to create strong family bonds between everyone. These relationships are so important because, many times, the students have hardships that they are facing with loved ones at home.

One graduate, Tarra Mitchell, understands the power of a tight-knit family. She has been fighting to keep her family unit intact for years.

Tarra’s story began when she became pregnant her senior year of high school. She earned her diploma and later went on to have two more children. Her children’s father, her ex, was very abusive. Addicted to meth, he was in and out of prison, and he eventually introduced Tarra’s three daughters to the drug. Her children followed their father’s footsteps, and they, too, were in and out of prison along with fighting for custody of their children.

Feeling stripped away from her family, Tarra became deeply depressed. “It felt like the devil was taking everyone I loved away from me,” she explained. She finally felt that she had reached a hopeless dead-end and decided to swallow a handful of pills to end her life.

Tarra’s family found her later that day, unconscious, and rushed her to the hospital. Jimmy Pruitt, West Georgia Health’s Chaplain, was called in to pray over her as doctors and nurses called the family in (expecting that Tarra wouldn’t live through the night).

But despite the medical assumptions, Tarra was off of life support and breathing on her own in five days. “God wouldn’t let me go,” she said.

Tarra remained in the hospital an additional three weeks, but she was unable to work for three months. As a result, she didn’t have the money to keep up with her bills, so she lost her car, her home, and still fought the loss of a firm relationship with her daughters and grandchildren.

However, Tarra’s outlook remained positive and hopeful: “I didn’t blame [Jesus] because I know that He was still with me,” she said.

Once Tarra found solid counseling through Kim Neese and found her way to Circles of Troup County, she began finding emotional, familial, and financial peace. “I’ve learned how to set goals, including budgeting,” explained Tarra. She has a steady job, a house, visits regularly with her grandchildren, and is a part of Reformers Unanimous. Tarra gives all of her thanks to her “strong community and faith.”

For Circles graduate Tikeia Lindsey, supporting a solid family unit is important, too.

Tikeia was the oldest child in her family, but she was watched by her grandmother. Growing up, she battled asthma and was very shy and timid in school. However, Tikeia had two gifts that made her feel like she could fearlessly stand out, “I did not receive much attention… but I could sing and dance. Those were my favorite things to do.”

Singing and dancing were her two biggest escapes from reality. Her father was never in the picture, and her mother was never there to take care of her. She understood what it was like to raise herself, living in a house “full of pests and rodents.”

Tikeia’s family was eventually separated by DFCS. She found herself pregnant at 15, and by the age of 19, she was working at Waffle House while trying to support her four children. In and out of an unhealthy relationship, she found herself in a homeless shelter. But, once Tikeia found Circles of Troup County, she was able to learn the skills of truly supporting her family.

She now has a full time job and is taking classes at West Georgia Technical College. “I am very thankful for the support of Circles of Troup County,” Tikeia said.

Because of the financial advice and family bonds from Circles of Troup County, graduates like Tarra and Tikeia can have the confidence that they will balance not only their bank accounts and finances, but their families and loved ones as well.

Troup County News congratulates Tarra and Tikeia for not only learning how to budget or ace an interview, but for learning how to support the families that they love too.