Grangers Clock Mohammed, 67-56; Williams: “We Played Hard And Together” 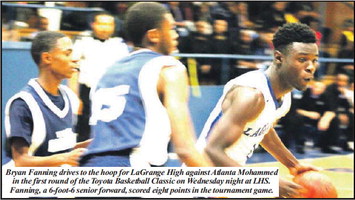 All they do is win basketball games. The No. 3-ranked Grangers rolled to their 10th win of the season on Wednesday night as they took down Atlanta Mohammed, 67-56 in the first round of the Toyota Basketball Classic at LaGrange High.

“We played hard and together. We hit some shots, and the game went back and forth,” said Granger junior guard Daz Williams, who contributed nine points to the LHS effort.

But as is the case in most LaGrange High games, it did not come down to one player or one play. It came down to the team itself. And the Grangers (10-1) are unselfish. Nobody in particular is looking for the credit.

The LaGrange High boys are just looking for the win. They got it on this night with a first quarter dunk from junior guard Bo Russell and a putback from senior forward Quez Jackson.

For LHS, the first period did end rather ceremoniously with a Russell threepointer and a 16-10 Granger lead. LaGrange High went on a 16-5 run in the first quarter after falling behind 5-0 to the Caliphs.

There would be more runs to follow for the state ranked Grangers. Doing the leading and the scoring for LHS were senior guard Laperion Perry with a second period three-pointer. Granger senior center Kenan Gray would cram home a dunk with 4:31 left in the first half to give LaGrange High a 23-15 lead.

Williams was winging it, too, with a layin with 1:07 remaining in the second period. The Grangers were up by 10 points at 31-21.

“We got some good guard play, and we can defend. We have good chemistry (on this team),” said La-Grange High boys basketball coach Mark Veal.

The artillery kept coming and hitting the intended target for the Grangers in the third quarter. LaGrange High found the net and a 45-29 lead behind a Williams field goal, a Russell threepointer, a Kenan Gray putback, a Williams threepointer and a Gray layup.

In the fourth period the LHS lead would swell to 17 points before Atlanta Mohammed rallied behind senior forward Tareef Sabree. The Caliphs got as close as 59-50 with 3:43 left. A three-pointer from Sabree cut the Granger lead to just nine points.

“We have a young team, and we battled hard. We never quit. We showed some some heart, and we got some rebounds,” said coach Farad Abdurrahman of the Mohammed Caliphs (2-8).

LaGrange High did finish off the Caliphs by going on an 8-6 run late in the fourth period. En route to the win the Grangers got another balanced offensive game with Perry’s 20 points, Gray’s nine points, Williams’ nine points, Bryan Fanning’s eight points and Bo Russell’s seven points.