Jones, Hoffman Are Back At McCluskey For Some Living, Learning 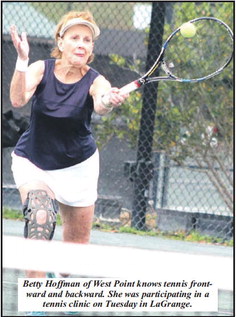 The biggest outdoor classroom was open for business on Tuesday morning. It just so happens to be located at the McCluskey Tennis Center in LaGrange.

The students were well above the age of 18. This was big girl tennis for adults. And as they know, this is not a game that can be learned in an hour, a day, a month or a year.

Tennis is a life-long project. Nobody knows it all, not even Luann Jones. She and three other local ladies took an active part in a 2-hour tennis clinic. Jones got what she came for, and it wasn’t milk and cookies.

“We were here for the groundstrokes, the volleys, the overheads and the backhands. We were working on strategy and getting some exercise,” said Jones, a West Point tennis talent.

Betty Hoffman was catching some sunshine and hitting the fuzzy ball, too.

“Tennis is my first love. This takes hand-eye coordination,” said the 68-yearold Hoffman.

She doesn’t look one day over 30. It might have something to do with the fountain of youth, known as competitive tennis.

Even a tennis clinic can be competitive.

Anita Holle and 59-yearold Vickie Teall of LaGrange had the tennis urge on this morning as well. Holle worked out her tennis kinks, and she guided some winners down the line, as well as just over the net.

This is a game where you need to hit the ball where they aren’t. Teall did that for all of two hours.

“We’re out here with friends, and there are some great people to play with. I just hope to improve (with every clinic and match). I’m getting some fresh air, and I play three to four times a week,” said Teall, the ex-Columbus College tennis player (1975-77).

“I’m competitive. I love to win. I’m just trying to move my feet. I’m working on my reflexes and volleys,” said Teall, who can still spin the ball.

Tennis is her favorite game, and McCluskey is Teall’s choice of venue.