Lanier, Wilkerson Are Looking For The Next Tennis Level 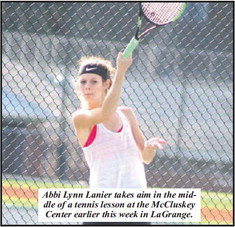 Somehow the morning turned into the afternoon in the snap of a finger and the stroke of a racket.

That can happen out on the tennis court at the McCluskey Center. Abbi Lynn Lanier, the Lady Granger junior, was scheduled for an hour tennis lesson on Tuesday morning. That was to be followed by an hour-long tennis session and lesson with Lizzie Wilkerson, the LaGrange High singles and doubles player.

What happened, however, was three hours of tennis. David Harpole, the tennis pro, inhaled it all. Both good and bad. Harpole accented the good and dove in on the bad.

There was a lot of both at McCluskey, thanks to Harpole, Lanier and the 15-yearold Wilkerson.

“It’s hard to leave (the facility) when you have two kids that want to improve,” said Harpole.

He was speaking directly about the athletic and the always ready twosome of Wilkerson and Lanier. They are best friends, on the court and off.

“They’re hitting a lot of forehands and backhands. Tennis is 85 percent movement. You can’t stand flatfooted. Both of these girls hit the ball better than anybody on the (Lady Granger) team. They’re just letting too many mistakes creep in,” said Harpole.

The lesson continued with the two best friends, the tennis pro and the mosquitoes. This tennis lesson did bite on this day. It was an arm-scratcher. “It’s still a lot of fun being out here. Our (tennis) games are maturing. We do need patience. We still need some work on strategy and serving. But we’re hitting more topspin,” said Lanier.

Wilkerson is learning to give and take a lot more, too.

“Sometimes you have to be okay with the other person hitting a good shot,” said Wilkerson. “Tennis is pretty important to me. You have to work at it. I do want to win all of my matches, and I know I’m improving,” said Wilkerson, the La- Grange High sophomore.

She and Lanier practice in the off season at least five days a week.

“I love it. We’re looking for consistency. Our forehands have improved,” said Wilkerson.

According to her tennis buddy, Lanier, “This is a mental game. We practice (in the off season) because we want to see how good we can get. We’re trying to cut down on our unforced errors.”

Both Lanier and Wilkerson expect to be somewhere in the Lady Granger starting lineup next season – either in singles or doubles. Wilkerson and Lanier played some No. 1 doubles and No. 3 singles last season.

They hope to do a lot more winning in 2017. Lanier and Wilkerson are seeking a region championship and more. The two girls do expect to play in the Class AAAA State Tournament, and they expect to win.

That’s what the off season workouts and tennis lessons are all about.