Frailey, Skandalakis, And Woodruff All Sworn In To Office 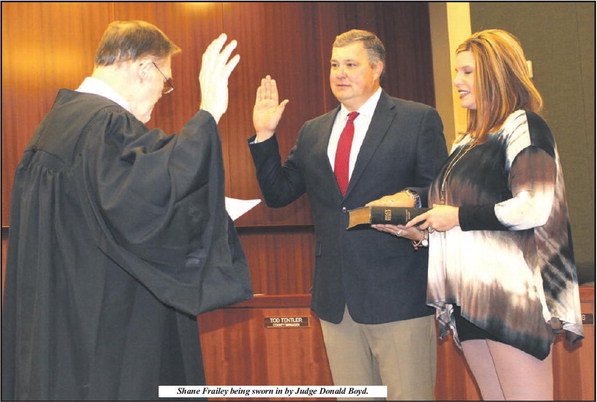 As the New Year quickly approaches, another round of swearing ins took place this week in preparation for these servants of the public to assume their roles. For two of these men, those duties will continue onwards and for one, he will begin a new journey in his political career. All of this took place on the morning of Thursday, December 29 as Shane Frailey was sworn in and Pete Skandalakis and James Woodruff were re-sworn in to continue their service in Troup County.

That morning at the courthouse was packed, so packed that the event had to be moved to the County Commissioner’s Chambers on the first floor. The honorable Judge Donald Boyd presided over the oaths of office and swore these men into their positions. One by one, each man took the pledge of office and the loyalty oath to either begin or continue their service. Shane Frailey was sworn in as the new Tax Commissioner for Troup County while Pete Skandalakis was sworn in once again as the District Attorney and James Woodruff as the Sheriff.

All three men won or kept their seat after the local elections this past May. Pete Skandalakis has been the District Attorney for over 25 years, first being elected in 1991 as the District Attorney over the Coweta Judicial Circuit. Sheriff James Woodruff will begin his second term of Sheriff of Troup County, winning the position for the first time in the race of 2012.

Both men have been long serving members of their community for many, many years. The story on the race for Tax Commissioner is a different tale and a new chapter for a man who has been a public servant for many years himself. After 26 years with the Sheriff’s Office and in law enforcement in general, Shane Frailey retired from law enforcement after being elected as Tax Commissioner of Troup County.

All three men are exceptional, not only in their jobs but also as outstanding men of integrity and character. They have dedicated themselves to this community in so many different ways and have always been there to help protect and serve so many over the years. In combination with them and all of the other elected officials in Troup County, we all sit in very confident and capable hands as our city and our county continue to grow at exponential rates.