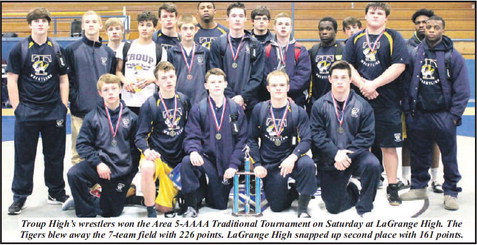 It had been a long time since the Troup High wrestlers last won an Area Traditional Tournament title.

Too long, in fact, for the Tigers. The Troup High drought was broken on Saturday, however. The Tigers drank from the championship water fountain for the first time in 14 years as they rolled to the Area 5AAAA Tournament title at LaGrange High.

Troup High was emphatic and on cue, winning the tournament by 65 points over second place LaGrange High. The Tigers clawed their way for 226 points. The Grangers took second place with 161 points in the 7-team tournament.

But it was the Tigers who had the championship stature.

“We have some of hardest working coaches in the state, and our team has a no quit mentality,” said Pearson Strickland, the Troup High sophomore.

Strickland would be the first THS wrestler of the day to win an individual Area wrestling crown. Strickland scored a 12-2 win over Pierce Simmons of Central Carrollton in the 106-pound weight division finale.

This was extra sweet for Strickland, who won his first ever Area individual title.

“I was ready, and I felt competitive. This was hard work, but I was mentally prepared. I was confident,” said Strickland.

Harry could have wrestled three more periods. He was on the top of his game and his opponent.

“I worked off his mistakes, and I took him down. I stayed focused. I finally achieved one of my goals, and I want to get to state,” said Harry, who improved his season record to 41-14.

Harry was only one of seven Troup High wrestlers who won Area Traditional Tournament championships.

“That means we’re getting better. I’m seeing steady progress. I am not surprised. This is a part of the process, and we expect to win,” said Tiger head coach Craig Garner.

The momentum kept on building throughout the day for the Troup High team. The Tigers also won Area individual titles with junior Chase Seals at 132 pounds, Gavin Wood at 138 pounds, junior Scott Hicks at 152 pounds, Bryon Butts at 182 pounds and junior Quenton Kersey at 195 pounds.

Seals won with a 3-1 decision over Robby Earick of Cartersville in the finals. Hicks concluded his last match with a pin over Chase Sams of LaGrange High with 28 seconds left in the first period.

Bohn has upped his season record to 32-3.