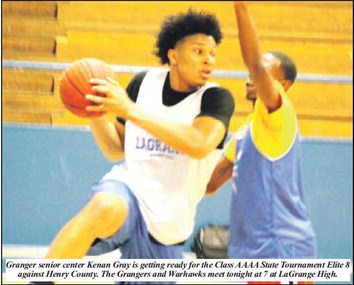 Henry County will enter the LaGrange High gym tonight with all the glitz, glitter and pre-game hype.

The Warhawks are ranked second in the state in Class AAAA boys basketball. Henry County is the favorite to get to the Final Four, and the Warhawks have won 17 straight games.

LaGrange High doesn’t plan on letting the Warhawks win 18 straight, however, in this evening’s State Tournament Elite 8 matchup. Game time is at 7 p.m.

“It’s going to be a great game, but our team is better. We just have to play defense and stick to our game plan. This is do or die. Henry County has two Division 1 guards,” said Granger senior forward Bryan Fanning.

Those two Warhawk guards, tall and talented, that Fanning mentioned are both seniors. Javon Greene, a 6-foot-2 sharpshooter, is averaging 20 points per game. He has signed a basketball scholarship with George Mason University.

Henry County’s second scoring threat is 6-foot-5 Damion Rosser. He is averaging 19 points per game and has signed with the University of New Orleans. LaGrange High is looking forward to the challenge tonight.

“We’re going to need to rebound, take charges and get out and run. Our team is playing together. The best team is going to win,” said Laperion Perry, LaGrange High’s senior point guard.

Then again, Henry County (23-5) might not have anyone who is capable of playing step-for-step with the blistering quick Perry. He is a fast break machine. He can rebound, dunk and score at a breakneck pace at 5-foot-8.

The Grangers will take a 6-game winning streak into tonight’s State Tournament game. They, too, are on a playoff roll.

“We believe right now. Every time we step out there we have a chance (to win). There is a lot to be said for momentum and confidence. I’m excited for our kids and our school. At LaGrange High we expect to play in big games,” said Mark Veal, the head coach of the No. 3-ranked Grangers (26-3 on the season).

LaGrange High has another believer in 6-foot-6 senior center Kenan Gray. He is ready to bang and lay some beef on the Warhawks. Surely there will be some 4-foot hook shots included for Gray.

“We can beat anybody. We just need to execute. We want to win it all,” said Gray.