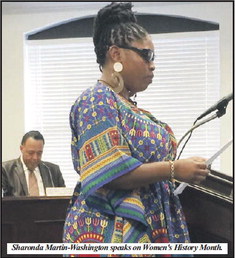 The Mayor and City Council had an exceptionally busy day this past Tuesday, March 28. Early that morning, the group was treated to a hard hat tour of the new downtown hotel that is currently under construction. For their work session that morning, they were hosted by Ark Refuge ministries where they heard updates from Ark Refuge and the Georgia Conservancy regarding Calumet Village. All of this happened before their regular meeting later on that night.

The second delegation of the night fell to Tabitha Lewis-Coverson to speak on Community in Schools (CIS), just a few short weeks after she made this presentation to the County Commissioners. CIS is a program dedicated to helping children in whatever ways they can in order to help them achieve academic success. Many children deal with heavy issues in their lives, ranging from issues with gangs, parents, living situations, and many things in between. CIS helps provide these children with whatever needs they may have in order to help them focus on academics. Last year, CIS helped over 2,300 kids in the Troup County School System and they have a very high success rate.

The last delegation that morning came from former Mayor Jeff Lukken on behalf of L.I.F.E (LaGrange International Friendship Exchange). This is the group responsible for hosting the incredible international festival downtown on Bull Street last September. The festival far exceeded the wildest dreams of all this involved, with people packing out the street, all learning about different cultures and even trying some different foods. All of this was free of cost for the public. L.I.F.E wanted to thank the Mayor and Council for their support during the event and share with them some photos of the festival that had been taken. The group is already in the planning stages for next year’s festival.

There were only two items left on the agenda at that nights meeting. The group carried a motion authorizing the Mayor and Assistant City Manager to execute a lease agreement with the Callaway Foundation for property located off of Haralson Street. They also tabled a second reading and voted on the rezoning of 613, 615, and 617 Hines Street. This will be decided on at the April 11 City Council meeting.

At the work session that morning, the Mayor and Council moved over to E. Depot Street, in the heart of Calumet Village. They were hosted by Ark Refuge Ministries at their facility and were also provided a delicious lunch. At the work session, the group would hear from two groups that are both doing incredible work within the Calumet Village Neighborhood and the community at large.

The first group that spoke was the Georgia Conservancy. The Conservancy has been doing a lot of work and is developing a plan for Calumet Village, one of La-Grange’s most historic neighborhoods. After taking surveys in the community and learning about the history/ legacy of Calumet Village, the team has come up with a plan looking at four distinct areas to work on. These areas include Corridors/ Connectivity, Neighborhood Commercial & Retail, Recreation, and Housing Choice. All of these are areas for improvement, with each section having specifics and breakdowns of recommendations. The Conservancy will finish up their report in the next few weeks and present a written, detailed report to the community and to the City.

The last speakers at that mornings work session was the host, Ark Refuge Ministries. Yvonne Lopez and her team went over a presentation outlining some of the goals and accomplishments of the ministry. In the 2015-2016 year, Ark had an exceptionally high graduation rate and has seen an increase in community service within members of their program. They have had many community partners including Feeding the Valley, Calumet Park, New Ventures, Pathways, and Rosemont Church. Their presentations that they distributed contained testimonies from some of the people in their program and how much of a positive impact Ark Refuge has had on their lives. After this, the Mayor and Council were treated to lunch sponsored by Ark Refuge.