Cornett Classic Is Slated For April 21-23 In LaGrange 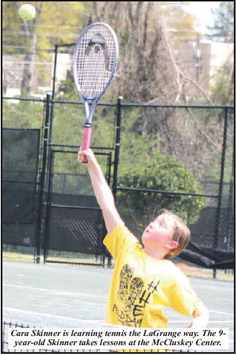 Let the backhands and forehands begin.

They will. The 5th Annual Cornett Classic is scheduled for April 21-23 at the Mc-Cluskey Tennis Center in LaGrange. More than 100 players are anticipated from Columbus, Pine Mountain, Atlanta and LaGrange.

The tournament will run the gamut with matches for the youth as well as men and women. The entry fee for the three-day tourney is $25 or $30 for two events.

Players can compete in more than one category. The ever popular Cornett Classic will include mixed doubles, men’s round robin, women’s round robin play, as well as boys and girls singles.

There will also be a doubles mixer for the youth. The tournament will begin on Friday, April 21 with the mixed doubles at 6 p.m. The women’s round robin is on tap for the second day of the tourney beginning at 9 a.m.

But the main reason for even putting this tournament on is to present a living tribute to the life of Joe Cornett, who passed away in 2012. He is missed, but he is long remembered.

Cornett’s contributions to tennis in West Georgia are immeasurable. Cornett, the former Pine Mountain resident, was a local tennis champion. He was as popular as he was good on the tennis court.

He was a teacher of the game as well and a friend of many. Cornett’s legacy lives on.

“Joe had a sense of humor. He loved to compete, and he played at ABAC (Abraham Baldwin Agricultural College) and Columbus State. Joe had a good kick serve and a good volley,” said Bill Champion, the head pro at the McCluskey Tennis Center.

This will be another sentimental tournament in Joe Cornett’s honor.

“Joe was my cousin and best friend. This is going to be fun,” said Champion.

Cornett is also remembered for his days as a tennis pro at Callaway Gardens and a number of clubs in Atlanta. Cornett’s tennis memory does live on. A scholarship will be awarded in Cornett’s honor during the tournament.

Any LaGrange area high school senior who has already been admitted to college is eligible for the tennis scholarship. The Cornett Classic has $1,000 in scholarship money. Registration forms are available at the Mc-Cluskey Center in LaGrange.

The deadline for scholarship applicants is April 12. The applications should be mailed to Bill Champion at P.O. Box 55, Pine Mountain, Ga. 31822.

As for the tournament, the youth will not be left out with four age divisions for singles play for girls and boys. The age classes are for 10 year olds, 12 year olds, 14 year olds and 16 year olds.

For more information on the tournament or the tennis scholarship call Bill Champion at 706-333-0159.