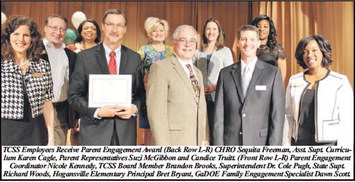 The recognition comes from a November 2016 video and written entry into the GaDOE’s Parent Engagement contest. For the video and written submissions, TCSS showcased the theme Parent Engagement Rocks! Both items showcased programs that TCSS has implemented to include and garner support for parental involvement. In late November, the district was named one of the top four in parent engagement within the state.

Fifth grade Honor Wave students along with staff from the host school, Hogansville Elementary, and central office administrators greeted Superintendent Woods before an assembly and school tour began. Students and parents were active participants in the program, including singing The National Anthem.

Two parent volunteers spoke with the crowd of students, sharing how much it meant to be involved in school activities. Candice Wheeler, Hogansville’s Parent Teacher Organization President, said, “The teachers and staff at Hogansville are more than people. They are like family. They have taken me in. They have helped me and my children. That’s what I love about being involved…you become family.”

Nicole Kennedy, Parent Engagement Coordiantor for the district, invited the students to participate in the program when she asked them, “Why is it important for parents to be involved?” She later told them there are at least five reasons parent engagement is important, including: Students have better attendance, Students have better behavior, Students make better grades, Students score higher on standardized tests, and Students are more likely to graduate from high school.

In addition, the video was posted on the GaDOE’s Parent Engagement Facebook page to assist in extending the network of parental involvement throughout the community. Facebook likes and shares were used as a metric in the judging rubric. Troup County School System’s Parent Engagement Rocks video received over 300 likes, 75 shares and 4,100 views.