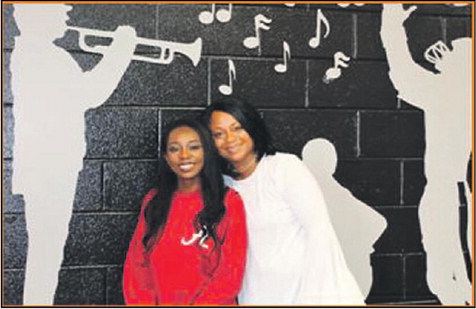 When Iyanla Mosley is in Mr. David Curtis’ Callaway High School science class, she feels at home. “Mr. Curtis has helped me to understand and really like science. He is a good teacher and he cares for his students.”

She has been playing the trumpet since she was in the 6th grade, but plans to hold off her first year of college when she will be yelling ‘Roll Tide’ in the fall as she heads to the University of Alabama where she will major in Biology. She plans to continue into the medical field as she hopes to one day become an optometrist and open her own practice.

For her, she won’t take a summer break. Instead, she will focus on getting a head start on classes. Iyanla says she is doing this for two reasons, “Alabama is a really big school. I want to get acclimated to the city, campus, and surroundings without as many people.”

She credits her mother, a military veteran, with helping her receive the Alabama Dependent Academic Scholarship so she can attend University of Alabama with little out-of-pocket expense.

The trumpet player does not think it’s fair to pinpoint one person who has helped influence her because, “there have been so many people who helped inspire me from my mother and many teachers that care about my future.” She loves to give back through volunteering at the local hospital and mentoring young girls in a group called Girl Power and Emerging Women.

Iyanla’s most cherished high school memory is being a member of the Cavalier marching band. She says, “I love attending every game, and every practice…I just love everything about it.” As a member in the band and the step team, she believes these activities have helped her open up, be more confident, and gain more school pride.

When asked what advice she would give to underclassmen, Iyanla said, “I would tell them to work hard and be involved in as many activities as you can. Don’t wait until your senior year to do your best.”