Lanier, Noles Put A Spin On Their Tennis Friendship 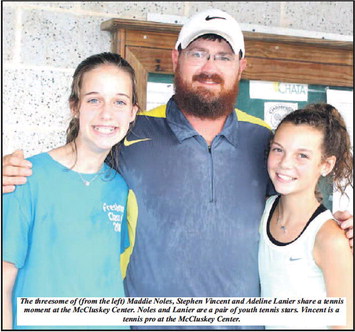 From the backhand to the lob shot, Adeline Lanier and Maddie Noles have a lot in common.

“We’ve known each other since kindergarten. We’re best friends, and we play tennis a lot,” said Noles, the 12 year old with the vivacious net game. So on a partly cloudy, eventually rainy Thursday afternoon, Noles and her best tennis buddy were slipping, sliding and competing once again at the McCluskey Tennis Center last week in LaGrange.

“This gives me a rush, and I just love tennis. To get better you have to practice,” said Noles.

“I like running and working. I need to hit better,” said Noles.

She and Lanier are witnessing daily progress on the tennis court. The two girls and the two best friends are watching their games grow together. These two nimble tennis girls are climbing and sprinting.

“This is not hard, but you have to be a worker. I am competitive. I like my backhand, and my arms are strong. I get mostly everything in, and I want to be a pro tennis player (one day),” said Lanier, the eighth-grader from Gardner Newman Middle School.

Lanier refines her game five days a week at Mc-Cluskey. She is motivated one tennis set at a time.

“I have an overhead and forehand (shots),” said Lanier.

The girl with the big racket also plays some United States Tennis Association Tournament matches in order to gain experience. Lanier has rolled with the tennis punches in tournaments in Peachtree City, Columbus and Auburn.

Lanier is fast both physically and mentally. She has played competitive tennis for just two years.

Noles is a young future star, too. Friends do let friends play tennis. Noles and Lanier do take every point serious, even at practice at the McCluskey Center.

“We just hit it back and forth. You can’t walk. You have to run,” said Noles.

She and Lanier crave this game whether on a clay court or a hard court. It is all fun for the two best friends come rain, or shine or a backhanded winner down the line.